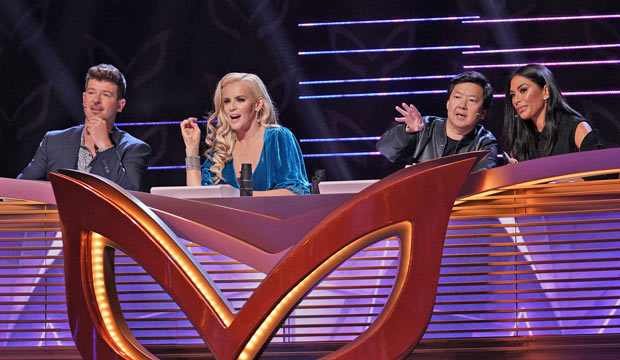 Over the course of the first five episodes of Fox’s reality TV show “The Masked Singer,” Nicole Scherzinger, Ken Jeong, Jenny McCarthy and Robin Thicke have shown their competitive spirit by making their best guesses about who’s behind the various masks. While some of the costumed characters’ true identities were quite obvious to guess based on the clues, others were complete shockers. Which of the four regular judges on “The Masked Singer” has the best track record so far? You may be surprised by the results. Scroll down for a refresher on all of the judges’ individual guesses.

Thus, after five episodes, all of the judges are tied at one correct guess and four wrong guesses. The most obvious celebrity to identify was Bradshaw, who was correctly predicted by two regular panelists as well as guest judge Joel McHale. Perhaps the biggest surprise was in the fourth week when Jeong failed to realize that his TV sister Cho from “Dr. Ken” was actually behind the Poodle mask. But Jeong made up for that huge mistake the following week when he was the only judge to correctly call that Spelling was hiding inside the Unicorn costume.