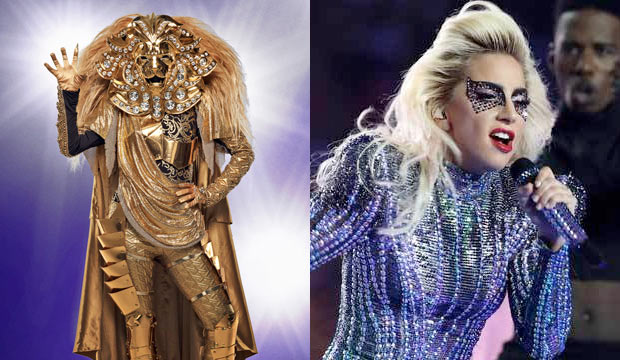 It’s the million-dollar question that has every reality TV fan scratching their heads: Is Lady Gaga really the Lion on Fox’s “The Masked Singer”? During Lion’s performance of Fergie‘s “A Little Party Never Killed Nobody” in the season premiere, judges Nicole Scherzinger and Jenny McCarthy suggested that Lady Gaga could be hiding underneath the extravagant gold-plated costume. Hearing that, fellow judge Ken Jeong responded, “It’s someone hella legit. It’s just gotta be.” What do YOU think, “The Masked Singer” fans? Let us know by voting in our poll below.

SEE ‘The Masked Singer’ spoilers: The Lion is …

“I’m the Lion and I’m here to roar,” said the masked performer in the “clues” portion of the program. “This is my chance for people to see me perform without any preconceived notions of who I am. Some might say I’m Hollywood royalty, but now I’m standing on my own. I’m stepping away from my pride to sing my heart out.”

SEE ‘The Masked Singer’ spoilers: The Peacock is …

That clue about “stepping away from her pride” prompted judge Robin Thicke to wonder if Lion used to be in a girl group, a la Destiny’s Child, Spice Girls or Fifth Harmony. Since Lady Gaga is a solo performer who didn’t come from “Hollywood royalty,” it seems like the clues aren’t quite matching up for her. She’s also in the midst on a months-long awards campaign for “A Star Is Born” that’s taking up most of her free time.

Before her boisterous performance, Lion announced, “I don’t see a Lion as just brave and courageous. True strength comes from embracing all your vulnerabilities. So here I am behind this mask. And I’m gonna show my true self for the very first time.” Hmm, with Lady Gaga already starring in a solo Las Vegas show, wouldn’t that be a better place for to show her “true self” to the world?

SEE ‘The Masked Singer’ revealed: Did YOU guess Hippo was actually Antonio Brown of the Pittsburgh Steelers? [WATCH]

Lion easily sailed through to the next round after winning her match-up against Deer, who’s likely a wrestler or UFC figher, so we’ll be seeing her perform again soon on the program. The performer who got voted out of “The Masked Singer” first, and thus had to unmask himself in front of the country, was Hippo, aka Pittsburgh Steelers wide receiver Antonio Brown.