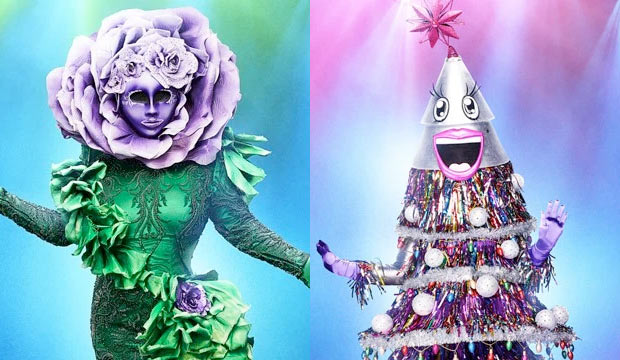 Only eight performers are remaining on the sophomore season of Fox’s “The Masked Singer.” Half of the competitors have been eliminated and all of the remaining performers have given their all to stay in this acid trip singing contest. But who actually stands the best chances of winning this season? Below, we’ve ranked the remaining eight disguised celebrities in order of their likelihood of winning the show. Do you think we have these in the right order? If not, how would you reorder them? Make sure to post your thoughts in the comments below.

SEE‘The Masked Singer’ preview trailer: One of these 4 contestants will be ‘the biggest surprise’ so far [WATCH]

1. Flower
The fact that Flower is ranked number one should be no surprise. From the moment she stepped on stage to perform Dolly Parton‘s “9 to 5,” she showed that her vocal talents are on a completely different level than everyone else. Her subsequent performances of “Cheap Thrills” by Sia and “Amazed” by Lonestar were both on the same level. If she keeps up this level of performing through the rest of her time on stage, it’s hard to imagine anybody else beating her.
Judges’ best guesses: Patti LaBelle, Tina Turner, Jessie J.

2. Tree
What a difference two performances can make. When I did a power ranking at the beginning of October, I had Tree way towardsthe bottom since I hadn’t been thrilled with her rendition of “High Hopes” by Panic! at the Disco. Since then she has brought the house down with two killer numbers: “Think” by Aretha Franklin and “No Excuses” by Meghan Trainor. Not only was her singing flawless, but she also upped the ante in the level of theatricality and it worked!
Judges’ best guesses: Molly Shannon, Rachel Ray, Amy Sedaris

3. Butterfly
When Butterfly kicked off the second season with “Bang Bang” by Jessie J., Ariana Grande and Nicki Minaj, it should have been apparent right away that she was going to stick around for a while. She continued to get the crowd pumped with her version of “Livin’ on a Prayer” by Bon Jovi and got them equally fired up by singing “Don’t Know Why” by Norah Jones. She’s also got some great stage presence but could be vulnerable if she doesn’t keep up this level of excitement the next time she’s on stage.
Judges’ best guesses: Michelle Williams (of Destiny’s Child), Fantasia, Leona Lewis

4. Rottweiler
This dog had an immediate stage presence when he sang “Maneater” by Hall & Oates during the two-part season premiere, though the backup dancers in pup masks may have been a bit much for me. His follow up numbers of “Love Runs Out” by OneRepublic and “Castle on the Hill” by Ed Sheeran were equally memorable. He’s brought a fantastic attitude and playfulness that definitely makes him the top male contender still in play.
Judges’ best guesses: Darren Criss, Brian Littrell, JC Chasez

5. Flamingo
We’re still not sure what this bird’s background is but she’s definitely been a force to be reckoned with. She started out very strong in her first two performances: “Sucker” by The Jonas Brothers and “Footloose” by Kenny Loggins. However, her last performance, “Never Enough” by Loren Allred, was vocally solid but didn’t have the kind of extravagance that you would expect for someone donning a flamingo costume. She’s gonna need to bring a stronger game in that area to stay in here for the long haul.
Judges’ best guesses: Olivia Jade, Kandi Burress, Adrienne Bailon

SEE‘The Masked Singer’: Anthony Anderson is all about the Nicole Scherzinger-Thingamajig showmance — ‘I can marry them’

6. Fox
I have to admit that the first rendition we got from this singer of “This Love” by Maroon 5 was very underwhelming for me. However, he definitely turned that around with his covers of “Hey Look Ma, I Made It” by Panic! at the Disco and “Every Little Step” by Bobby Brown. His dance moves from the latter performance were incredibly well done as well but he’s going to have to keep his future appearances on that level to survive.
Judges’ best guesses: Jamie Foxx, Sterling K. Brown, AJ McLean

7. Leopard
It was tough to rank this kitty so low but the vocal range we’ve heard hasn’t been as dynamic as the other singers. He rocked his debut of “Somebody to Love” by Queen but his performance of “Stitches” by Shawn Mendes didn’t rise to the same level. Thankfully, he got back on the right track with “Teenage Dream” by Katy Perry. His costume is exquisite and his playfulness with the judges and Nick Cannon, can help make up for sets that don’t stack up with the others but how long can that last for? Also, don’t forget that of the remaining contestants, the Leopard is the only one that was forced into a smackdown in the first three episodes.
Judges’ best guesses: Billy Porter, Tyler Perry, RuPaul

8. Thingamajig
There’s no denying that this monster has a very charming voice. His debut number of “Easy” by Commodores caught all the judges off guard and made him one of the top contestants to watch. The two numbers he’s performed since then, “Rainbow” by Kacey Musgraves and “Ain’t Too Proud to Beg” by The Temptations, have been great but have just been more of the same. If he doesn’t give a stand out performance in his next appearance, it could very well be the last we see of this strange creature.
Judges’ best guesses: Montell Jordan, Tony Parker, Michael Strahan