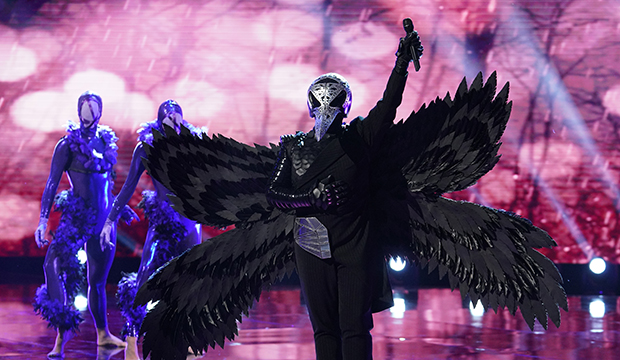 On Wednesday’s “The Masked Singer,” the Raven was unmasked and it was exactly who you thought it was: Ricki Lake. And she thought it was kind of obvious too.

“I kind of knew [people were guessing me]. The clues seemed like a dead giveaway,” Lake said Wednesday during the show’s panel at the Television Critics Association press tour following a screening of the episode. “I was, like, ‘They are going to know it’s me.'”

Among the Raven clues over the last few weeks: A pregnancy test — Lake made the 2008 birthing documentary “The Business of Being Born” — and that she had hosted a talk show. On Wednesday’s episode, her physical clue was a Daytime Emmy Award (definition of a #humblebrag); Lake won Outstanding Talk Show Host for “The Ricki Lake Show” in 2013.

WEEK SIX SPOILERS: Who are the Bee, Monster, Rabbit

Lake performed “Brave” by Sara Bareilles on Wednesday’s episode, but came up short in the votes against the Bee, Peacock and Monster. A week after Ken Jeong correctly guessed Tori Spelling as the Unicorn (and refused to let anyone forget it), Robin Thicke came through with the Ricki Lake prediction. And it wasn’t just based on the clues, as Thicke revealed himself to be a diehard Ricki Lake fan. The biggest tell: Raven put her hand over her heart, just like Lake did on her “Ricki Lake” talk show.

“When she put her hand over her heart, it was like a photographic memory clicked,” Thicke said during the panel, sharing that he used to watch Lake’s show after school as a teenager. “I would watch about five hours of television every day. … There was Oprah and Jerry Springer and there wasn’t much in between for … going over youth problems. And ‘Ricki Lake’ was one of the only shows like that, so I enjoyed the show.

“Robin knew from my gestures it was me,” Lake added. “I guess it’s gratifying that I’m still somewhat relevant after all these years.”

One panelist who clearly wasn’t as well-versed as Thicke was in all things Ricki Lake was Nicole Scherzinger, who remarked in the episode that Raven is not a professional singer. “Nicole said, ‘She’s definitely not a professional,'” Lake teased. “I studied singing for 10 years!”

The “Hairspray” star said she agreed to do the show after talking to casting director Deena Katz, who also cast her on Season 13 of “Dancing with the Stars.” Lake initially turned it down, but Katz “came back to me and said, ‘No, no, no, this is going to be huge and this is going to be a lot of fun!'” Looking for a new challenge and something joyful to do following the 2017 death of her ex-husband Christian Evans, Lake said she had a great time despite not being at her healthiest while filming the show.

“I had sciatica during the period of making this show and I could barely walk,” she revealed. “I was in a lot of pain during this process. I still managed to have a great time.”

She added: “I’m all about reinvention. … And to do this sort of ode to my beloved, it was really special.”

Lake, who said she hasn’t talked to any of the unmasked singers yet, said there definitely didn’t need to be any monetary incentive to do it either. The ultimate masked singer gets a trophy and, well, pride. “I’m always up for trying new things. I was a trained singer. Not anymore!” she said. “It was for the fun of it. I’d been through a really rough couple of years and this was about joy.”