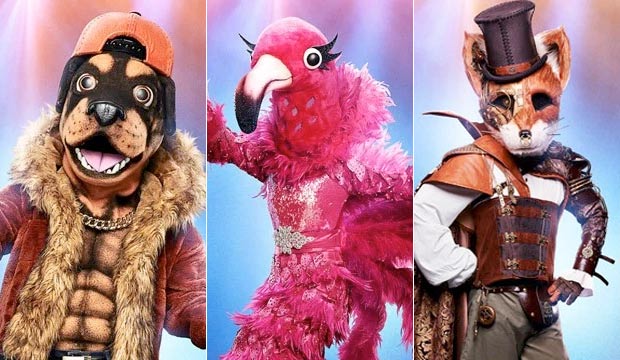 And then there were three. Fox’s wild and wacky reality TV “The Masked Singer” closed out Season 2 on Wednesday night with three finalists still in the running to win the coveted golden mask: Rottweiler, Flamingo and Fox. Throughout this fall cycle, panelists Robin Thicke, Jenny McCarthy, Ken Jeong and Nicole Scherzinger made their expert guesses about which famous celebs were hiding behind the masks, with all finally being revealed in the two-hour finale. Did YOU correctly guess the secret identities of Rottweiler, Flamingo and Fox? And were you happy with who ultimately won the golden mask?

SEE73% of ‘The Masked Singer’ fans guess Adrienne Bailon is the Flamingo: What do YOU think? [POLL RESULTS]

Below, check out our minute-by-minute “The Masked Singer” recap of the Season 2 finale, titled “And the Winner Takes It All and Takes It Off,” to find out what happened Wednesday, December 18 at 8/7c. Then be sure to sound off in the comments section about your favorite costumed celebs on Fox’s reality TV show and what you thought of the winner. Keep refreshing/reloading this live blog for the most recent updates.

8:00 p.m. — “Previously on ‘The Masked Singer’!” In the 12th episode, the Final 5 masked celebrities performed for the panelists, with Thingamajig and Leopard receiving the lowest number of votes. They were then forced to remove their extravagant masks, revealing NBA player Victor Oladipo and singer-songwriter Seal, respectively. Their eliminations meant only three masked singers remained to fight it out in the finale: Rottweiler, Flamingo and Fox. Who will win? Let’s get this show started!

8:15 p.m. – It’s been a pretty surreal season of singing bugs, monsters and critters and we get a behind-the-scenes look at how these celebrities pulled everything off. It took top-notch security, lying to family members and dressing in steamy hot costumes to hide their secret identities. For the first hour of tonight’s finale we simply get a recap of the finalists’ prior performances and clues as to who they are.

8:55 p.m. — Heading into the final hour, each of the three finalists gave one last clue via Twitter. From Fox,”To the dog and the birrrd – I’ve already won a famous duel on stage. Now it’s time to take down 2 challengers. #scrappyandhungry.” Flamingo says, “Hola pups! Flam Flam is getting glam glam before I add more gold to my collection. #lifeinpink.” And Rottweiler adds, “This dog’s luck wasn’t great against a cat – but I won’t lose to a flamingo or a fox. #fueledtowin.”

9:10 p.m. — The first finalist to sing for the Golden Mask is Fox. He’s loved singing and dancing his tail off every week and for his final performance he has one mission: Win. He’s obsessing over every detail and every dance move. He’s ready to finally write his own story and will make Mr. Fox a friend for the rest of his life. Singing “Try a Little Tenderness” by Otis Redding, Fox is bringing out both the vocals and the funk. Midway through the song, Fox throws in a rap verse followed up by some serious choreography. Fox will not go down without a fight! Following the performance, Fox gets emotional and says he didn’t know until right now how much winning would mean. He’s actually in tears and says he hasn’t always been happy and he’s found joy again wearing a mask. After that emotional moment, the panel guesses Fox could be Jamie Foxx or Wayne Brady.

9:20 p.m. — Flamingo is the second singer ready to sing for the Golden Mask. It’s been an emotional journey for her to perform for a group of panelists she idolizes as entertainers. She’s been able to break out of the box she’s put herself in and give it her all tonight. Tonight she’s singing “Proud Mary” by Tina Turner and ready to bring out her rock edge and choreography. After the first verse she kicks things into high gear and shakes those tail feathers! Following her performance Flamingo begins to cry and says she was told she would never amount to anything and even though she’s doubted herself she’s determined and hard working. She’s truly had the time of her life on “Masked Singer.” Following her teary-eyed confession the panel guesses she is Adrienne Bailon or Fergie.

9:30 p.m. — Rottweiler is the last singer to take the stage in hopes of getting his paws on that Golden Mask. The first time he walked on this stage it felt like a new beginning for him. His big break happened when he was just a pup and he never really got a say in who he was. Although he fought hard to forge his own path, it’s been impossible to change how people see him. Winning this will show everyone who ever underestimated him that he is capable of more than they gave him credit for. Rottweiler is singing “Alive” by Sia to show off his pop/rock sensibilities and he’s blowing the audience away with his powerful vocals. What a range! He’s decided to focus more on vocals while his competitors relied on more of a stage show. We’ll find out soon what method pays off! Following his performance Rottweiler reveals how grateful he is because he’s often his own worst enemy. He feels like he’s already won. The panel thinks Rottweiler could be Darren Criss, Dave Franco or Jason Mraz.

9:40 p.m. — The time has come to say farewell to our favorite characters and see who has won the Golden Mask trophy. The votes are in and the performer coming in third place is Flamingo. For their final guesses Jenny, Nicole and Robin agree that it’s Adrienne Bailon. Ken says it’s Jessica Simpson. Finally, Flamingo un-masks to reveal she is, in fact, Adrienne Bailon!

9:50 p.m. — The winner of this season’s Golden Mask is Fox! Fox is the king of “The Masked Singer” and Rottweiler will have to settle for runner-up. Before we discover who Fox is, it’s time for Rottweiler to unmask. For their final guesses, Nicole and Robin agree on Darren Criss. Jenny says it’s Jason Mraz and Ken insists that Rottweiler is Dave Franco. When Rottweiler finally reveals himself we find out that he is Chris Daughtry!

9:59 p.m. — It’s finally time to find out who the Season 2 winner of “The Masked Singer” is. The panel is asked to make their final guesses. Ken and Jenny are certain it’s Jamie Foxx. Nicole and Robin think it’s Wayne Brady. So who is Fox? He pulls off the mask to reveal Wayne Brady! Nick presents him with his Golden Mask trophy and wraps up the evening. “The Mask” will return to television on February 2, 2020 after the Super Bowl.