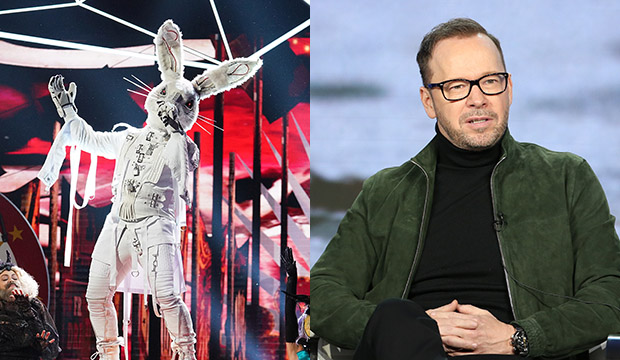 Yes, Donnie Wahlberg knows you think he might be the Rabbit on “The Masked Singer,” and no, he cannot say if he is (duh).

During a panel promoting his new HLN show “Very Scary People” at the Television Critics Association press tour on Monday, the actor and New Kids on the Block member addressed the speculation that he might be the bunny who crooned Ricky Martin‘s “Livin’ la Vida Loca,” Avicii and Aloe Blacc‘s “Wake Me Up” and Bell Biv DeVoe‘s “Poison” on the Fox hit.

“Can’t answer that,” Wahlberg said. “I can only tell you that there’s a list of boy banders who are alleged … to be the Rabbit and I’m on the list. I think I’m trending third now behind Joey Fatone and Joey McIntyre.”

SEE ‘The Masked Singer’ spoiler: The Rabbit is…

The Rabbit is one of the few masked singers who has fans stumped. (We’ve been torn between Fatone and JC Chasez.) Some of the Rabbit’s clues: He “found safety in a group”; “synchronized singing was my forte”; and he’s spent “most of my life on stage, but I was never alone.” All suggesting a boy bander, natch.

Even Wahlberg’s wife, Jenny McCarthy, one of the panelists on “The Masked Singer,” said at TCA last week that she thought her hubby was underneath the mask as well. “I think my husband is the Rabbit,” she shared. “That’s how it messes with my mind.”

McCarthy knows who the Rabbit is now, of course, since the season is in the can, but she has not told Wahlberg who it is. “My wife signed the disclosure form, so I don’t even know who’s in the costume,” he said, before quipping, “And if it’s me, I haven’t found out yet.”

The Rabbit will return to the stage with his fourth performance on Wednesday’s episode.

We won’t find out for sure if JC is the Rabbit till he is unmasked. That will only happen if he loses a match-up or wins the show. Do you think we are right about the true identity of the Rabbit? Sound off in the comments section with your best guesses.