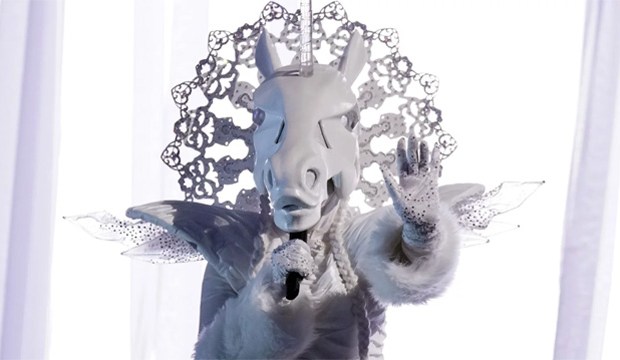 Episode three of “The Masked Singer” saw the return of the five celebrities from the premiere who had won enough votes to continue on in this hit reality competition series. In order of appearance on Wednesday’s episode they were the Lion, Deer, Peacock, Unicorn and Monster. Despite the Deer’s best efforts on the Florida Georgia Line hit song “Get Your Shine On,” he lost the audience vote and was revealed to be NFL superstar Terry Bradshaw.

The other four acts will be back in two weeks time to sing again. But we can’t wait until then to find out the identity of one more of them. So we’ve been watching their clues videos and analyzing the comments of the judges. We think we have a spoiler as to each of their real selves. We are almost certain that the Unicorn is Tori Spelling (despite some misleading clues this week that are leading some to think that it is Denise Richards).

In week one, the Unicorn said “I was born in one of the wealthiest neighborhoods.” Tori is the only daughter of TV producer Aaron Spelling who produced “Beverly Hills 90210,” the soap on which she starred. The opening sequence of that hit drama was referenced in her first clues video. Denise was born in the village of Downers Grove in Illinois and is the daughter of a coffee shop owner and a telephone engineer.

The Unicorn also said, “my childhood should have been magical.” While Denise has spoken lovingly of her close-knit family, Tori chronicled her miserable early years in a 2008 tell-all “Stori Telling.”

Granted, in episode 3, the Unicorn does concede that she has been lacking confidence “because I lost my sheen.” Some, including judge Nicole Scherzinger, take this to be a reference to Denise’s tempestuous marriage to Charlie Sheen. But anyone who followed this tabloid drama knows that Denise was a warrior in that battle.

The Unicorn also declares her intention to exude “model behavior.” That clue does undercut our confidence slightly given that Denise did get her start as a model.

We won’t find out if Tori (or Denise) is the Unicorn till she is unmasked. That only happens if she loses a match-up or wins the show. Do you think we are right about the true identity of the Unicorn? Sound off in the comments section with your best guesses.