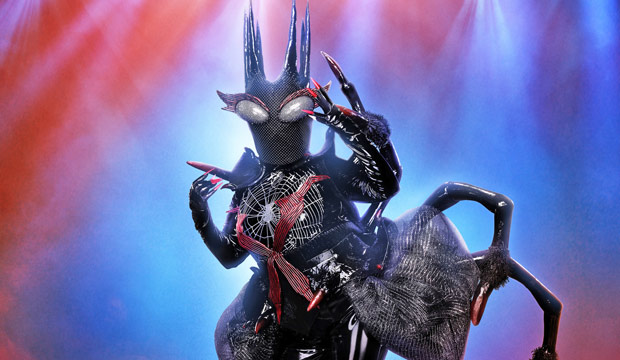 “The Masked Singer” aired two episodes on November 6. The second of these featured the five singers who competed on the last show to air before the World Series break: the Black Widow, Butterfly, Flamingo, Leopard and Thingamajig. Among the standouts on that episode back on October 16 was the celebrity hidden inside the Black Widow costume. She strutted around the stage as she performed the Carrie Underwood hit “Before He Cheats.” The Black Widow had been equally good in week two when she covered the Whitney Houston classic “I Wanna Dance with Somebody.”

To keep busy while this reality competition series was off the air, we’ve been doing some detective work. We rewatched  the performances of all the contestants as well as their clues videos. We have all “The Masked Singer” spoilers, including the real name of the Black Widow. Keep reading if you dare.

The Black Widow is Raven Symone. This TV veteran currently headlines the Disney Channel series “Raven’s Home.” But she is also a singer, with five studio albums to date including the double platinum soundtrack “The Cheetah Girls.”  Consider the following evidence for our theory:

In her clues video, the Black Widow revealed that she had been in the public eye for many years; Symone first came to fame on “The Cosby Show” almost three decades ago.

The Black Widow welcomed us to her “empire”‘ that is the name of the FOX show on which Symon guest-starred).

We saw pictures of a peach; Raven hails from Georgia, which is well-known for that fruit); the Sagittarius symbol (Raven was born on December 10 so that is her astrological sign); and a crown (she appeared in “The Princess Diaries” sequel).

Symone has released several records and sounds just like the Black Widow. What do you think? Sound off in the comments section below with your thoughts.