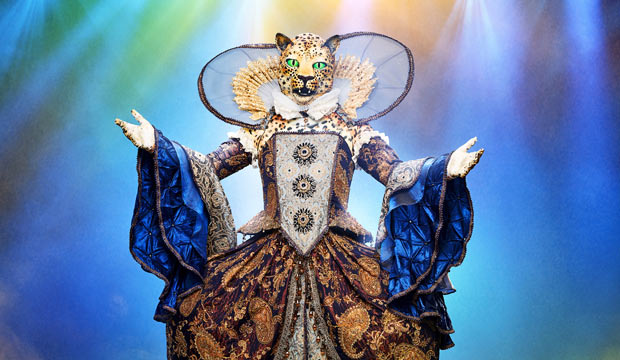 “The Masked Singer” is mixing up the groups and the first newly combined quartet of contestants takes to the stage on the November 20 episode. Competing for the audience vote and hoping to win over the four judges (Ken Jeong, Jenny McCarthy, Nicole Scherzinger and Robin Thicke) are celebrities disguised as the Flamingo, Flower, Leopard and Rottweiler.

Of these four famous folk, the best singer of the bunch is the Leopard. He first appeared in week 2 when he rocked the house with his cover of “Somebody to Love” by Queen. In week 4, he changed it up with his version of “Stitches” by Shawn Mendes. And in week 5 he delivered a different take on “Teenage Dream” by Katy Perry.

We’ve been obsessed with figuring out the true identity of the Leopard. So we’ve watched these three performances as well as his clues video repeatedly. We think we’ve cracked the case. Keep reading for third of this week’s “The Masked Singer” spoilers.

We are convinced that the Leopard is Seal. Disagree? Well take a look at our reasoning and then sound off with your thoughts in the comments section.

Seal was born in London, England on February 19, 1963. The Leopard speaks with a pronounced English accent.  And the number “1963” is flashed throughout his clues video.

Seal stands 6″4″ tall, which matches the height of the Leopard.

The Leopard readily admits he is unhappy with the “celebrity aspect” of his life. Seal became a tabloid fixture when he was married to supermodel Heidi Klum.

Seal has won four of his 14 Grammy bids. The 16 contestants on “The Masked Singer” have won 10 Grammys from 42 nominations.

What do you think of our guess? Who do you think is hiding inside the Leopard costume? Sound off in the comments section below.

SEE ‘The Masked Singer’ spoilers: The Flower is …