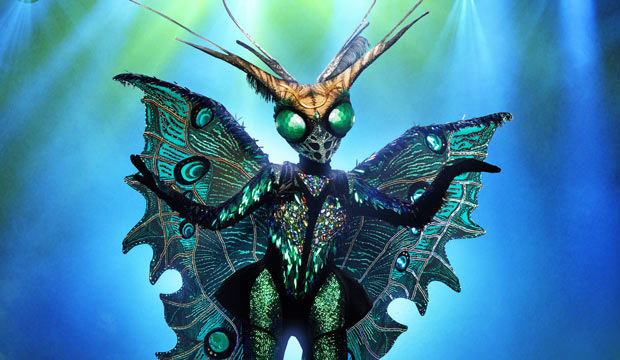 The fourth episode of “The Masked Singer” on October 16 saw the return of six stars who had shone in the first two weeks of this reality competition series. Of these half dozen contestants four had won over the audience with their singing: Butterfly and Thingamajig in week one and Black Widow and Flamingo in week two. The other two — Skeleton and Leopard — had to win over the judges (Ken Jeong, Jenny McCarthy, Nicole Scherzinger, Robin Thicke) to continue in the competition. Their respective opponents, Egg and Panda, were revealed to be skater Johnny Weir and boxer Laila Ali.

We’ve been busy since the first episode trying to figure out which famous faces are hiding beneath these elaborate masks. Keep reading if you want to know as we have all “The Masked Singer” spoilers, including the name of the Butterfly, who was the very first contestant to perform in week one. She opened the show with a toe-tapping cover of the hit dance tune “Bang Bang” by Jessie J, Ariana Grande and Nicki Minaj.

Her silky singing voice confirmed our suspicions that the Butterfly is Michelle Williams, who was one-third of the Destiny’s Child trio. This group sold 60 million albums, with five of these going platinum and three of those awarded multi-platinum status (as a group, “The Masked Singer” celebrities can boast of 20 platinum and 6 multi-platinum records). And Destiny’s Child was nominated for 14 Grammy Awards (collectively, the 16 contestants on “The Masked Singer” earned 42 Grammy bids); the trio won three (the contestants won 10 in total).

Between them, the 16 celebrities on “The Masked Singer” have appeared in 22 Broadway shows. Williams has been on Broadway three times , with starring roles in “Aida” and “Chicago” and a featured one in the recent revival of “Once on This Island.”

Before taking to the stage for the first time, the Butterfly cautioned that the cumbersome costume could be her downfall, literally. Indeed, she readily admitted, “I just pray that I don’t fall over.” Williams is still haunted by the header she took when performing as part of Destiny’s Child on BET way back in 2004.

Her clues video included a photo of the London skyline — Michelle lived in the English capital for a time. It closed with the Butterfly declaring, “I’m here to take you to church” — Michelle has made gospel records, including the 2014 hit “Say Yes.”

SEE ‘The Masked Singer’ spoilers: Who is Thingamajig?

We won’t find out for sure if Michelle is the Butterfly till she is unmasked. That will only happen if she loses a match-up or wins the show. Do you think we are right about the true identity of the Butterfly? Sound off in the comments section with your best guesses.