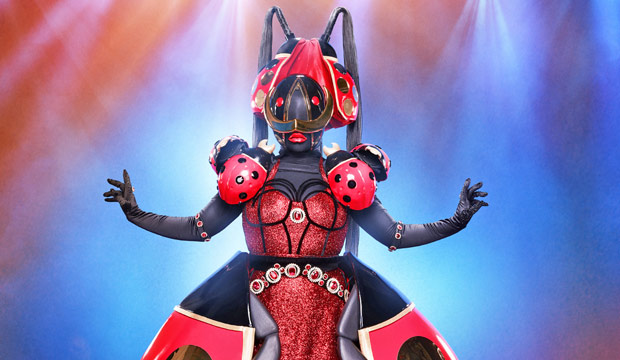 “The Masked Singer” reached the halfway mark of season 2 on November 13 when episode 7 aired. This jam-packed hour featured performances from five celebrities dressed as the Flower, Fox, Ladybug, Rottweiler and Tree. One of these five contestants will be sent packing by the four judges (Ken Jeong, Jenny McCarthy, Nicole Scherzinger, Robin Thicke). Only then will we find out who they really are.

But we don’t want to wait till then. So we’ve been busy since the show started trying to figure out which famous folk are competing. We think we’ve uncovered the identities of the contestants, including the real name of the Ladybug. Keep reading for the third of this week’s “The Masked Singer” spoilers.

The Ladybug first performed on the premiere, rocking the house with her cover of “Holding Out for a Hero” by Bonnie Tyler. She was at risk of elimination but saved herself with her version of “Hit Me with Your Best Shot” by Pat Benatar. She returned in week 5 to sing “Juice” by Lizzo.

We are sure that the Ladybug is Kelly Osbourne.

In her clues video, the Ladybug reveals she comes from a famous family and has endured a lifetime of drama; Kelly and her clan were featured on a long-running reality series. We see a series of photos that correspond to lowlights on that show, including when they threw a ham over the backyard fence and let their dogs run free in the house.

The Halloween images suggest Kelly’s dad, rocker Ozzy Osbourne, who is infamous for having bitten the head off of a bat during one rock show.

While the Ladybug has a strong Southern accent, we think it sounds put on.

Do you think we are right that Kelly Osbourne is the Ladybug? Sound off in the comments section below with your thoughts on who you think is hiding inside the Ladybug costume.