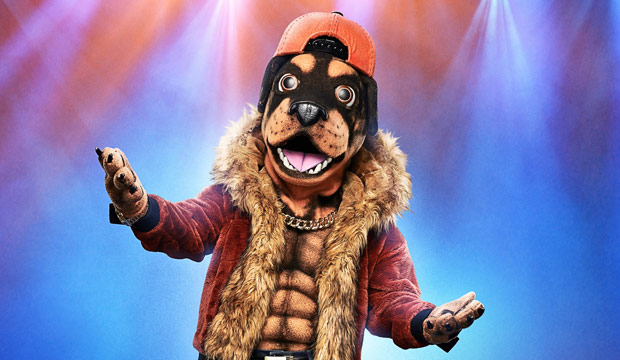 The quarter-final of “The Masked Singer” on December 10 was packed with performances by the six celebrities still in the competition. Among these was the Rottweiler who had the crowd howling their approval yet again. He is fighting for a place in the semi-final as are the contestants disguised as the Flamingo, Fox, Leopard, Thingamajig and Tree. All are hoping to win enough votes from the studio audience to avoid the sing-off in front of the four judges (Ken Jeong, Jenny McCarthy, Nicole Scherzinger, Robin Thicke).

We think that the Rottweiler is one of the best singers still in the hunt for the season 2 title. He has wowed us with each of his four previous performances. He was the stand-out in week 1 with his cover of the Hall & Oates classic “Maneater.” Likewise on week 5 he owned the stage with his version of the OneRepublic hit “Love Runs Out.” He did the same in week 6 with  “Castle on the Hill” by Ed Sheeran and in week 7 with “Grenade” by Bruno Mars.

We’ve watched all of these performances repeatedly as well as his clues videos. We think we’ve figured out who is really the Rottweiler. Keep reading for the fourth of this week’s “The Masked Singer” spoilers.

The Rottweiler is Chris Daughtry, lead singer in the band Daughtry.

As a group the 16 contestants on “The Masked Singer” have taken home 10 Grammy wins from 42 nominations. Daughtry has four nominations to his name.

One of those was for his break-out hit “It’s Not Over.”  In his clues video, the Rottweiler says that he wants to show the world that when it comes to his career “it’s not over.”

The Rottweiler reveals that he became famous overnight. Daughtry came to fame as a finalist in season 5 of “American Idol” in 2006.

The Rottweiler says that he loved to play football but is now happy to watch from the stands; Daughtry played on his high school team in Roanoke Rapids, North Carolina.

The clues video includes a photo of blue roses; Daughtry has a large tattoo of a blue rose that he says is a symbol of love, prosperity and eternal life.

SEE: ‘The Masked Singer’ spoilers: The Leopard is …