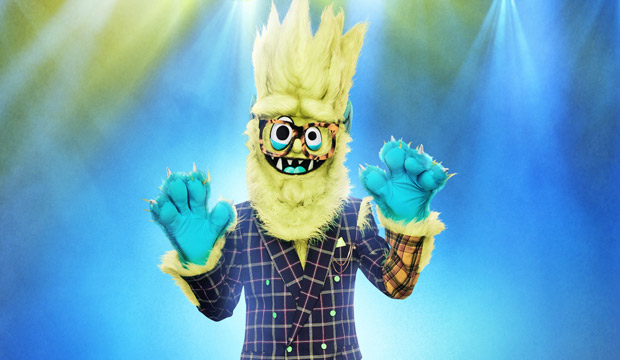 “The Masked Singer” took Thanksgiving week off and returned on December 4 with four of the seven celebrities hoping to make the season 2 final. Competing this week in elaborate disguises are the Butterfly, Fox, Thingamajig and Tree. Each hopes to earn enough support from the studio audience that they don’t end up in the bottom two who have to sing for survival in front of the four judges (Ken Jeong, Jenny McCarthy, Nicole Scherzinger, Robin Thicke).

Among this famous foursome is one true standout — the Thingamajig — who towers over the competition. He wowed the crowd on the premiere with his cover of The Commodores hit “Easy.” He then soared in week 4 with his version of “Rainbow” by Kacey Musgraves. And he rocked the house in week 5 with his rendition of “Ain’t Too Proud to Beg” by The Temptations.

We’ve been working away trying to figure out the famous face hiding behind this mask and think we now know the real name of the Thingamajig. Keep reading for third of this week’s “The Masked Singer” spoilers.

We are confident that Thingamajig is Victor Oladipo, an NBA all-star who is currently a guard on the Indiana Pacers. Disagree with us? Well consider the following:

Thingamajig demanded that he not be referred to as “Chewbacca” even though he and the “Star Wars” character do “celebrate together.” Oladipo was born on May 4, which just happens to be “Star Wars” day (as in “may the force be with you”).

Oladipo started his NBA career with the Orlando Magic in 2013. Prior to his first performance, Thingamajig, who stands 7 feet tall in his costume, was seen doing a bit of magic and held up a pair of sneakers.

While we are convinced that Thingamajig is Oladipo we won’t know for sure until he is unmasked when he either wins the competition or is eliminated. What do you think? Sound off in the comments section and let us know if you agree with us.