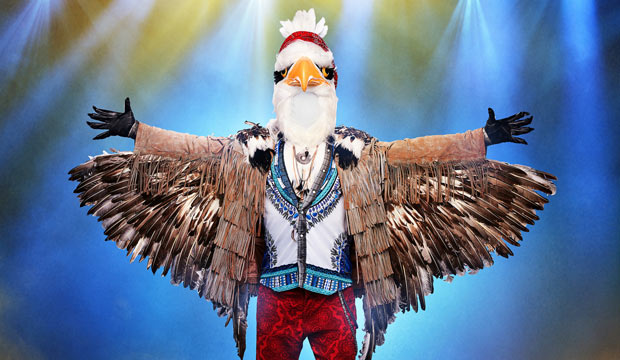 Fox has a huge hit with “The Masked Singer,” a reality competition series that is adapted from the South Korean series of the same name. Nick Cannon introduces celebrities who perform songs while completely hidden in elaborate costumes. Part of the fun is guessing which famous faces are hidden behind these masks. So far, we’ve learned the identity of three of the first dozen stars: the Egg was revealed to be Olympian Johnny Weir, the Ice Cream was professional gamer and YouTube star Tyler “Ninja” Blevins and the Panda was boxer Laila Ali.

Four more famous folk disguised as an Eagle, Flower, Fox and Penguin.competed in front of the four judges (Ken Jeong, Jenny McCarthy, Nicole Scherzinger, Robin Thicke) on the October 9 episode of “The Masked Singer.” But who are they? We’ve analyzed the clues that they gave to their identities. Keep reading for “The Masked Singer” spoilers on the true identity of the Eagle.

The Eagle is Bret Michaels, lead singer of the rock band Poison. Consider the clues and how they fit with our guess.

The Eagle declares, “The competition will be saluting me.” Bret is renowned for his patriotism and his work with Operation Homefront, a charity that provides assistance to the families of service members and wounded warriors.

He teases, “If you know an eagle’s body temperature, you’ll be hot on my tail.” That is 106 degrees, and Bret’s Sirius satellite radio channel is 106.

Included in the video is a motorcycle; Michaels is an avid cyclist. He lives in Arizona, which ties in with the shots of the house in the desert and the images of the sun.

What do you think of our theory? We won’t know if we are right till the Eagle is unmasked when he leaves the competition or wins season 2 of “The Masked Singer.” Who do you think is hiding inside the Eagles costume? Sound off in the comments section below.