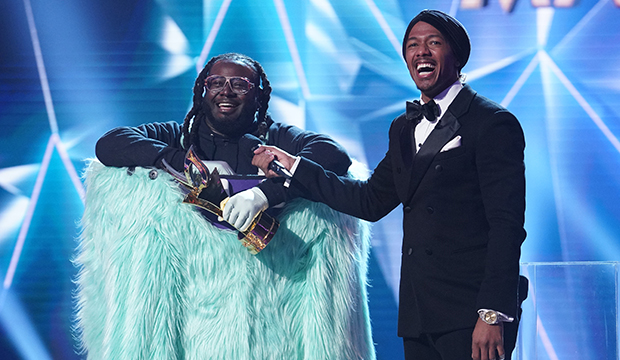 What would your costume be on “The Masked Singer”? The possibilities are endless, or maybe just whatever options the costume department puts in front of you. T-Pain got to choose his outrageous get-up and he selected Monster for one very simple and rather pessimistic reason: He thought he would be eliminated early.

“I figured I’d get voted off super-quick,” he told the Los Angeles Times. “So I was like, ‘Lemme just wear the most ridiculous thing I can before I get up out of here.'”

Of course, the season didn’t unfold that way. T-Pain stuck around until he was the last masked singer standing, winning Season 1 of the breakout Fox hit over Peacock Donny Osmond and Bee Gladys Knight. In hindsight, he says if he had known he would last so long, let alone win, he wouldn’t have picked that fluffy, stuffy, bright blue monstrosity (no pun intended) that looks like blown-up cotton candy to be stuck in for weeks.

The rapper, who’s currently on tour in support of his new album “1UP,” never expected to make beyond the first week because he says he’s been “trained” to expect the worst after years of taking flak for using Auto-Tune.

But as he proved on “The Masked Singer,” he can actually sing — his soulful crooning a far cry from the android-like vocals most people associate with him, making his unmasking even more of a surprise for some folks, including panelists . Ken Jeong, Jenny McCarthy, Nicole Scherzinger and Robin Thicke. “The Masked Singer” was vindication for T-Pain — even if it didn’t go according to his costume plan — and it also got him a whole new demographic of fans.

“I went on an Instagram rant the other day and somebody told me, ‘Little white kids are looking at you now — stop your cursing!’” he said. “I was like … you’re right.’”