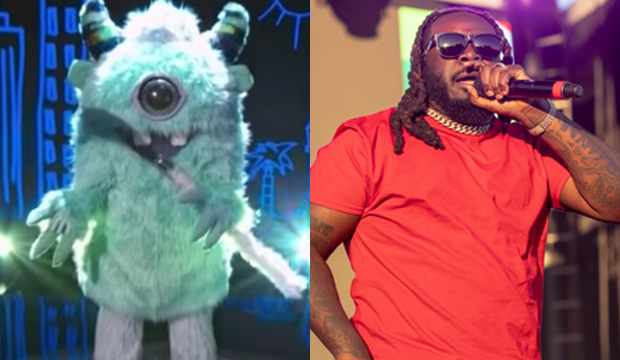 “The Masked Singer” was “a weird pitch,” admitted eventual winner T-Pain, who was hiding behind the Monster costume throughout the first season of Fox’s hit reality TV show. In a March 22 “Today” show interview, the rapper joked, “I may not have been sober when I heard it, but it worked out!” T-Pain was named the winner of Season 1 on February 27 by the studio audience and panelists Ken Jeong, Jenny McCarthy, Nicole Scherzinger and Robin Thicke.

SEE 4 reasons why ‘The Masked Singer’ needs to air LIVE in Season 2: Hey Fox, are you paying attention?

T-Pain continued, “Just think of trying to pitch that show to somebody. At first when I first heard it I was like, ‘Man, this is probably the stupidest thing I’ve ever heard in my life.’ I saw the costume and I was like, ‘Well, I at least gotta wear that thing once.'” He then confessed, “I was planning on getting kicked off the first episode.”

The runner-up of this first season was Donny Osmond (as Peacock) while Gladys Knight (as Bee) came in third place. T-Pain never thought he’d be competing against such legendary celebrities, noting, “In no universe is that possible unless you’re in a Monster costume.”

SEEJoey Fatone is hopping, er, hoping to do this on ‘The Masked Singer’ next season

Because of the popularity of “The Masked Singer,” T-Pain revealed, “A lot of people are calling now. We had to add a second leg of the tour.” He said that he’s gotten a whole slew of new fans thanks to appearing on the show, but they’re either “tiny children” or “super old people.”

T-Pain also opened up about losing his brother right after “The Masked Singer” finished filming. “I think all of this now is him,” T-Pain stated about his newfound success. “It’s him doing all of this for me. I would have loved for him to be here seeing this but … he’s got a front-row seat.”