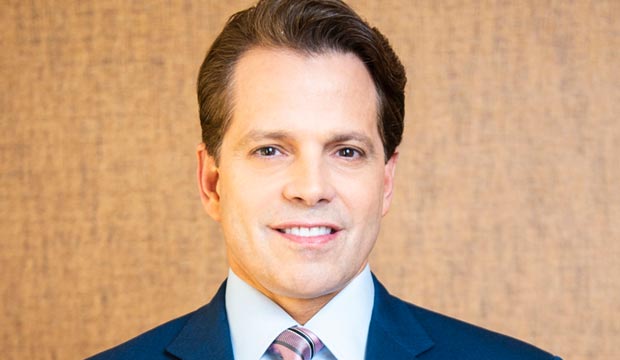 After being nominated for eviction in the second episode of “Celebrity Big Brother” Season 2, Anthony “The Mooch” Scaramucci expressed his frustration in the Diary Room. “So I come into the house, we’re making champagne toasts and getting along with each other, and then boom! I’m on the block,” he harrumphed. Do YOU think the Mooch will be the first “Big Brother” cast member evicted this week? Hurry and make your predictions right now.

The Mooch continued on, “I’m an entrepreneur. I survived the financial crisis. I even survived the D.C. swamp. So I’ve gotta figure out a way to adapt and pivot to last at least 12 days in this house.” Despite his displeasure at being one of the first three nominees for eviction — yep three, not the usual two — he still told Head of Household Ryan Lochte he had “no hard feelings” at the nominations ceremony.

Joining the Mooch on the block during this first week of “Celebrity Big Brother” is actor/host Jonathan Bennett and actor/comedian Tom Green. Jonathan was nominated by default because he lost the mano-a-mano battle against his buddy Ryan, while Tom was put up by HOH Ryan after Jonathan successfully convinced him to spare Dina Lohan for at least one week.

SEERyan Lochte and Jonathan Bennett sound off about ‘Celebrity Big Brother’ twist: ‘Julie, why’d you have to do that?’

Earlier in the episode the Mooch created an unlikely alliance with Tom and actor/host Kato Kaelin. While they were all sitting around in the kitchen, the Mooch blatantly asked, “Explain to me how an alliance works in your mind. What’s an alliance do?” After Kato and Tom explained the logistics — “If anyone wins Head of Household, they don’t put each other on the block” — the three men then shook hands, solidifying their out-of-the-blue alliance.

What’s the significance of the Mooch’s “12 days” comment? He infamously only worked in the White House as Donald Trump‘s communications director for 11 days, so his goal in the “Big Brother” house is to at least last one day longer than he did in the White House. One way for the Mooch to make it to next week would be to win the Power of Veto, which plays out in Wednesday’s episode of “Celebrity Big Brother.”