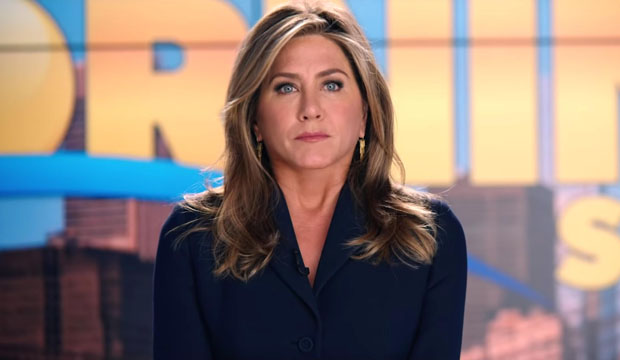 Thanks to television, Jennifer Aniston once became a superstar and now, in her prime, returns triumphant in the terrific new AppleTV+ series offering, of all things, a revealing, heart-breaking peek at life behind the TV cameras.

“The Morning Show” is special, not just because it’s marvelously written, directed and produced – or because it marks the long-awaited arrival of Apple productions – but because we see the familiar world of a.m. television through the matured eyes of a much-missed friend. While watching “The Morning Show,” it’s impossible not to think: Wow, look at that! It’s Jennifer Aniston! She’s back at the center of my TV screen and she’s rocking it again! Go, Jennifer!

How can award voters resist giving Jennifer Aniston a TV homecoming hug? They can’t. Aniston will surely win the Golden Globe and perhaps the SAG Award next. Then imagine Emmy night. If she prevails again, the audience of TV industry survivors will go crazy with cheers and tears.

PREDICTMake your predictions for Golden Globes, Oscars and SAG Awards

In all of those Best Actress races, costar Reese Witherspoon competes against her in the lead race, but she can’t beat Aniston, whose most formidable rival will be Olivia Colman (“The Crown”). “The Morning Show” looks solid for a nomination for Best Drama Series at the Golden Globes according to predictions by Gold Derby’s Experts, Editors and Users. And Steve Carell will probably snag a berth for Best Supporting Drama Actor. And there will be lots of love from the guild awards thanks to smart direction, production design and more.

Personally, I’m rooting for “Morning Show” to pop at the Writers’ Guild Awards. With apologies to Jennifer Aniston, I think the greatest thing about the bravura “Morning Show” is the writing – thanks to the impressive chops of  Kerry Ehrin (“Bates Motel,” “Friday Night Lights”) and Jay Carson (“House of Cards”).