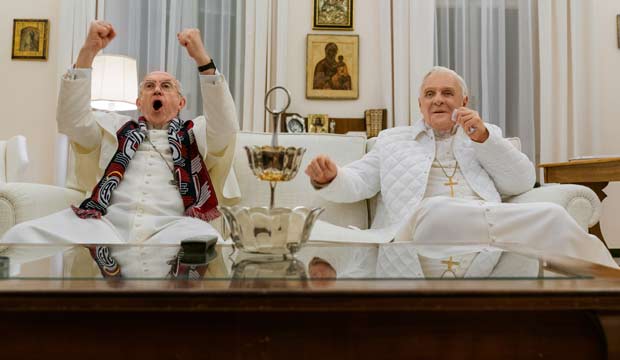 After premiering at the Telluride Film Festival in August, “The Two Popes” opened in limited release on November 27. But if it’s not at a theater near you, worry not: the Netflix film will begin streaming on December 20, just in time for Christmas. But do critics have faith in the religious drama imagining conversations between Pope Benedict XVI (Anthony Hopkins) and the eventual Pope Francis I (Jonathan Pryce)?

As of this writing it has a MetaCritic score of 78 based on 16 reviews counted so far: 13 positive, 3 mixed, none outright negative. Meanwhile, it’s rated 90% fresh on Rotten Tomatoes based on 49 reviews, only 5 of which are classified as negative. The RT critics’ consensus says of the film, “Led by outstanding performances from its well-matched leads, ‘The Two Popes’ draws absorbing drama from a pivotal moment in modern organized religion.”

RT classifies reviews on a pass/fail basis as opposed to MC’s sliding scale from 0-100. So the differing scores from the two aggregators indicate a lot of like for the film, but not necessarily a lot of love — though two of the MC reviews are rated a perfect 100, so there’s certainly passion for it.

The performances by Hopkins and Pryce are being described as “finely tuned.” They “illustrate what the craft of acting is really about.” Director Fernando Meirelles, who is better known for bringing higher-octane thrillers “City of God” and “The Constant Gardener” to the Oscars, makes the title pair’s “religious faith seem real” and “touching.”

But others argue that it’s not convincing that these characters “might actually have spoken most of these words.” And the lack off attention on Benedict’s backstory given his controversial past and involvement in the Catholic Church’s sexual abuse scandal is “a major weak spot.” Check out a few of the reviews for the film below, and discuss this and more here in our movies forum.

Kate Taylor (The Globe and Mail): “It is extremely difficult to make something as invisible and ineffable as religious faith seem real, let alone touching, on film; doing that is only one of the achievements of Fernando Meirelles’ unusual look inside the papacy … Hopkins and Pryce’s finely tuned performances illuminate Benedict’s shrewd intelligence and Francis’s deep humility.”

Sasha Stone (The Wrap): “His latest film, ‘The Two Popes,’ which had its world premiere at the Telluride Film Festival, turns out to be one of the best from the Brazilian director who also made ‘City of God’ and ‘The Constant Gardener’ … What makes ‘The Two Popes’ so delightful, other than the very funny script, is watching two seasoned actors play off each other for two hours. Both Hopkins and Pryce illustrate what the craft of acting is really about.”

Sara Stewart (New York Post): “The screenplay, by Anthony McCarten (‘Bohemian Rhapsody’), delves deeply into Bergoglio’s past … But the film head-scratchingly never trains a similar magnifying glass on the history of Ratzinger, a man whose boyhood membership in the Hitler Youth led to his being reviled by some as a Nazi sympathizer. The film’s refusal to look at Benedict in kind is a major weak spot.”

Mike D’Angelo (The A.V. Club): “What they don’t do is persuade any rational viewer that Benedict and Bergoglio might actually have spoken most of these words … ‘The Two Popes’ offers little in the way of purely cinematic pleasures, relying almost exclusively on the expert parrying of Hopkins and Pryce … ‘The Two Popes’ works best as an exercise in counterpoint, even if it never quite sells the far-fetched notion that these polar opposites ever formed a secret alliance.”