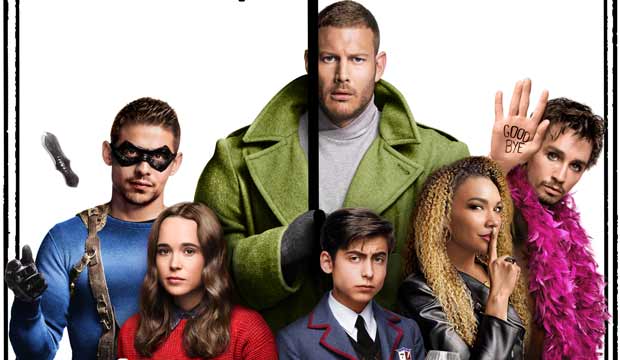 “The Umbrella Academy,” Netflix’s family drama about dysfunctional superheroes fighting to avert the apocalypse, premiered on February 15, and on April 2 it was officially renewed for a second season, which will begin production this summer in Toronto, Canada. So what do we know about the new batch of episodes?

Well, we know that all seven superpowered Hargreeves siblings will be back: Ellen Page, Tom Hopper, David Castañeda, Emmy Raver-Lampman, Robert Sheehan, Aidan Gallagher and Justin Min are all set to reprise their roles. But there’s no word yet on possible returns for time traveling assassins Mary J. Blige and Cameron Britton or wise chimpanzee Adam Godley.

Steve Blackman is also returning as executive producer and showrunner for the new season, along with fellow producers Jeff F. King, Mike Richardson, Keith Goldberg, Gerard Way and Gabriel Bá. Blackman was previously known as a writer and producer of shows including “Bones,” “Legion,” “Fargo” and “Altered Carbon.” His work on “Fargo” earned him an Emmy nomination for Best Limited Series in 2017.

“The Umbrella Academy” is based on the Dark Horse comic book series of the same name that was written by Way and illustrated by Bá. But before Way became a comic book writer he was actually the Grammy-nominated founder of the band My Chemical Romance, so Blige isn’t the only musician moonlighting in the superhero world with this series.

SEEEmmy spotlight: Robert Sheehan (‘The Umbrella Academy’) is extremely loud and incredibly Klaus, and I love it

The second season will consist of 10 hour-long episodes, just like the first season, and will be produced by Universal Content Productions for Netflix. Are you excited for the return of this unconventional family?