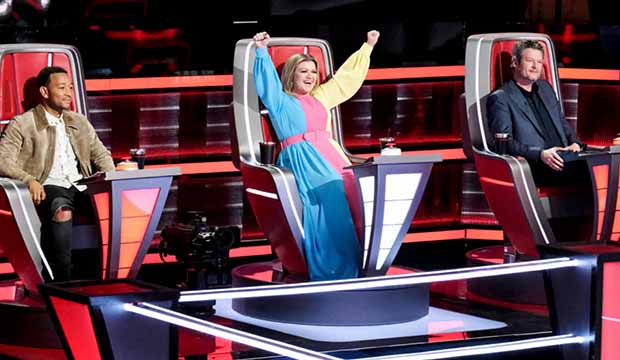 Battle rounds end Tuesday on “The Voice.” Who will be the final artists moving forward for this season in this one-hour episode? It’s also the last chance to see advisors Charlie Puth (Team Adam), Khalid (Team John), Kelsea Ballerini (Team Kelly) and Brooks and Dunn (Team Blake) in action.

Producers are unveiling a new twist beginning next Monday on NBC for a group of episodes they call “Live Cross Battles,” which is way earlier than we were expecting live shows. Coaches for this year are John Legend, Adam Levine, Kelly Clarkson and Blake Shelton, all battling themselves for the coaching crown.

SEEGet ready for ‘The Voice’ twist that ‘no one will see coming’: Will Knockout rounds be replaced by [SPOILER]?

All throughout this season, we continue our tradition of updating live blogs while each episode is airing for the east and central time zones. Follow along below and keep refreshing during the two hours. Make your own comments about which artists you like and don’t like for this winter/spring cycle. Read our full minute-by-minute analysis for the first two evenings of battles on Monday, March 25, Monday, April 1 and Monday, April 8.

And now follow along and refresh our live updating blog below for the Season 16 battle round Night 4 on Tuesday, April 9:

8:00 p.m. – It’s the last day of the Battle Rounds! The coaches are looking for which artist connects to the audience before ultimately choosing the winner. But all hope is not lost for those who come up short because Blake has one steal remaining. Let’s get started!

8:10 p.m. – Tonight’s first battle is coming from Team Adam: Patrick McAloon vs. Andrew Jannakos. While Patrick has a more precise voice, Adam finds Andrew a little more untamed. Andrew is a bit of a hipster country singer whose image doesn’t necessarily match his sound. Patrick has been a musician for 25 years and shared his experience thus far with his daughter Ruby, who also auditioned but failed to get a coach to turn. Patrick and Andrew will be going to battle on the song “Free Fallin'” by Tom Petty. Adam advises them to harmonize on the chorus while Charlie is trying to keep them on pitch. Which artist will prevail? It’s time to battle.

8:15 p.m. – Andrew begins the song, looking sharp in a white jacket while sounding solid but nervous. Patrick chimes in next with his whispery vocals and higher confidence level. Thankfully they were able to work out their pitch issues and their harmonies seem flawless. Their clear lack of comfort as a duo makes this performance difficult to enjoy, but overall the vocals were solid. Blake says the discovery of the night is Andrew, who soared on the chorus. Kelly also seemed to favor Andrew while John remained neutral. Ultimately, the winner of this battle is…Andrew! Unfortunately, Patrick has been eliminated.

8:25 p.m. – Tonight’s second battle pits two artists from Team Blake against one another: Selkii vs. Cecily Hennigan. Blake paired them together because they both have a singer-songwriter vibe. They’ll be singing “Head Above Water” by Avril Lavigne and Blake hopes it will show off their vulnerability and range. In rehearsals, the mentors like how Cecily sings the melody, but hear more angst in Selkii.

8:35 p.m. – Selkii begins the performance with Cecily chiming in soon after. Selkii is definitely the grittier of the two while Cecily’s voice is like silk. I don’t find this battle terribly exciting and I keep waiting for someone to do something interesting. Finally the chorus kicks in and they both start to cut loose, but I give the edge to Selkii in this sub-par battle. None of the coaches were of any help to Blake, abstaining from naming a winner. Blake struggles in making this decision, but finally he chooses a winner…Selkii! Cecily has been eliminated.

8:40 p.m. – As the final night of battles continued, the coaches were faced with more tough decisions. In shortened clips we see that Carter Lloyd Horne defeated Lili Joy on Team Blake after a performance of “I Got You Babe.” On Team Kelly, Karen Galera defeated Alena D’Amico following their duet, “Imagine.”

8:50 p.m. – Team Legend will wrap up the Battle Rounds with one more epic brawl: Kayslin Victoria vs. Oliv Blu. Kayslin is a ball of energy while Oliv is a laid back, jazzy vocalist. They’ll pair their contrasting styles on the Khalid hit, “Location.” Khalid stresses that he doesn’t want to hear himself in their interpretations, he wants to hear them. Kayslin’s voice is clear as a bell and her confidence at 16 is astonishing to John, but he loves the musical choices and vibe of Oliv. Khalid tells them both dance, vibe and have fun with it. Regardless how this plays out, we know neither of these two are going home since Blake is holding on to that final steal. So let’s Battle!

8:59 p.m. – Oliv is the first to sing and I love her relaxed, confident energy and vibe. This song definitely fits right into her wheelhouse and allows her to show off her impeccable phrasing. Kayslin sounds cool, but I don’t think this is the type of record she would make and I don’t feel anything when she sings. She’s got a heck of a range, but for me Oliv wins. Kelly loves Oliv’s style, but thinks she could give Kayslin any song and she could nail it. But who would John prefer to work with moving forward? The winner is…Kayslin! Oliv received Blake’s final steal, moving her forward as well. That should make for a fun pairing! That’s a wrap on the Battle Rounds!

While you can’t make “The Voice” predictions until the Top 20 live shows start, be sure to make your predictions to influence our reality TV racetrack odds for “Survivor,” “American Idol,” “RuPaul’s Drag Race” and more. You can keep changing your predictions until just each episode airs. You’ll compete to win a spot on our leaderboard and eternal bragging rights. See our contest rules and sound off with other fans in our reality TV forum. Read more Gold Derby entertainment news.