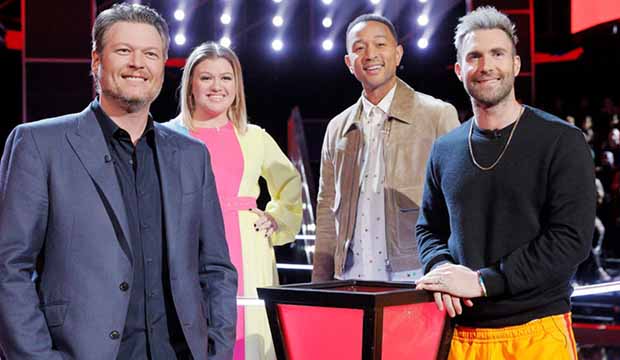 With battle rounds over halfway finished for “The Voice” in Season 16, which artists are your favorites this year? Will some of the final steals be used for Monday’s episode on NBC? Those are a few of the questions we have as coaches John Legend, Adam Levine, Kelly Clarkson and Blake Shelton are battling themselves for the crown.

SEEGet ready for ‘The Voice’ twist that ‘no one will see coming’: Will Knockout rounds be replaced by [SPOILER]?

All throughout this season, we continue our tradition of updating live blogs while each episode is airing for the east and central time zones. Follow along below and keep refreshing during the two hours. Make your own comments about which artists you like and don’t like for this winter/spring cycle. Read our full minute-by-minute analysis for the first two evenings of battles on Monday, March 25 and Monday, April 1.

And now follow along and refresh our live updating blog below for the Season 16 battle round Night 3 on Monday, April 8:

8:02 p.m. – We kicked off the third night of battles with Team John’s Lisa Ramey vs. Betsy Ade, soul vs. pop rock. John paired them together because they both deliver on a raw female energy that he knew would match well together on Brandi Carlile‘s “The Joke” which straddles the line between both of their individual genres. During rehearsal Khalid was impressed by both women and seemed a little bummed that John had pitted them against one another, but are we surprised by that rookie error at this point?

8:12 p.m. – I thought each of them began the performance on shaky ground, but once they joined together for the chorus it really soared, becoming more of a true duet than a battle in my opinion. Adam loved that they each did completely different things with the song and were able to bring it together in the perfect way. For Blake, Lisa was best in the verses while Betsy’s voice lended itself more to the chorus. Like Adam and Blake, John seemed a bit torn by the decision, but he went with the singer he thought “electrified” him with her voice and that was Lisa. Luckily what he wanted to happen happened–Kelly used her last steal on Betsy!

8:24 p.m. – Adam’s first pairing of the night was Mari and Anthony Ortiz. With Lauv‘s “I Like Me Better” Charlie told them that the secret to performing the song would be capturing the intimacy and emotion of the song. Adam wanted Anthony to “stay mellow” while he hoped that Mari would formulate “a plan” for her vocal that allowed her to focus on her upper register.

8:35 p.m. – Once again the performance felt more like a duet than a battle–Anthony and Mari brought an appropriate amount of youthful energy to the song and bounced off of each other both in performance style and vocal. For me, Mari was a clear standout though, showing off the clarity in her lower register and having a lot of fun with the song overall. The panel agreed that Mari really owned the song and they, including Adam, thought that Anthony’s nerve showed. Needless to say the decision was pretty clear and so Mari moved forward still a part of Team Adam.

8:45 p.m. – Hannah Kay and Andrew Sevener were Blake’s first battle of the night. He challenged both of them, more comfortable with traditional country music, with “Tequila,” a contemporary song that would offer them the chance to prove they can enter the current country market. Blake also said that it forced them to “step up to the plate’ in examining their voice outside of their pocket. In the end, Blake kept Andrew saying that he owned the song.

8:51 p.m. – For Kelly’s first pairing she brought together Jackson Marlow and Abby Kasch to take on “Bring on the Rain” by Joe Dee Messina and Tim McGraw. Because the two artists admitted they aren’t the best at harmonies, Kelly agreed to rework the song so that they could both have their own moments. After the performance, Kelly said she loved the richness in Jackson’s voice, but also loved that Abby is “unbridled.” She decided to keep Abby because of her passion, love for being on stage and overall joy for music.

8:59 p.m. – Next up was John’s young male vocalists Jacob Maxwell and Talon Cardon. For them he wanted to challenge them with an uptempo song so he handed over “Every Little Thing She Does Is Magic” by The Police. Khalid noticed that both of the guys were letting their nerves get in the way during rehearsal while John was focused on fixing some of the harmonies that weren’t hitting the right notes.

9:10 p.m. – In their final stage rehearsal John was still worried that their energy wasn’t matching the song, but in the performance both of them raised the level in that regard and had both Blake and Adam hyped. Jacob was in more control of the song according to Adam, but John was more concerned with his personal preference and so he gave the win to Jacob.

9:20 p.m. – Kelly put David Owens and Rebecca Howell together for a classic song that has the potential of criss-crossing through different genres. That song was “Unchained Melody” in the style of Leann Rimes. Both artists found it easy to connect to the song and so reaching the emotional core of it came naturally. At stage rehearsal they surprised Kelly by being unexpectedly fluid as a pair, setting her up for one of her most difficult decisions.

9:31 p.m. – The arrangement lended itself to a lot of harmonizing between the two artists, at which they excelled. John called the pairing beautiful despite both of them having different ranges and tones. Based on the critiques of the other judges the decision was split, but Kelly had to choose one of them to stay on her team. Hoping that David would be stolen, Kelly saved Rebecca and planned to push her further in the direction of country music going forward. Despite a strong plea from Kelly and a gut feeling by John, Blake did not steal David, but Bebe Rexha did! David became the third eliminated artist to head to “The Comeback Stage” for a second chance.

9:42 p.m. – The last battle of the night was from Team Adam with Jimmy  Mowery and Kalvin Jarvis. Charlie thought that Kalvin put a new twist on the Usher song “U Got It Bad” in rehearsal, but it was going to take a lot to match Jimmy who Adam said during the blinds has one of the best voices in the competition.

9:53 p.m. – Throughout the performance, John, Kelly and Blake were all zoned in wishing that either of these guys were on their team. It was by far one of the best battles of the season, earning a standing O from the coaches. Blake found the arrangement of the song complicated considering all the of the overlapping and blending, but he thought they managed it impressively. For Kelly it was Kalvin that owned the song and made it his own, but the guys couldn’t choose a winner between the two. Of course, Adam was forced to choose one over the other. Ultimately his decision came down to consistency and so he picked Kalvin. That left Jimmy open for a steal which John smacked down for instantly.

While you can’t make “The Voice” predictions until the live shows stars, be sure to make your predictions to influence our reality TV racetrack odds for “Survivor,” “American Idol,” “RuPaul’s Drag Race” and more. You can keep changing your predictions until just each episode airs. You’ll compete to win a spot on our leaderboard and eternal bragging rights. See our contest rules and sound off with other fans in our reality TV forum. Read more Gold Derby entertainment news.