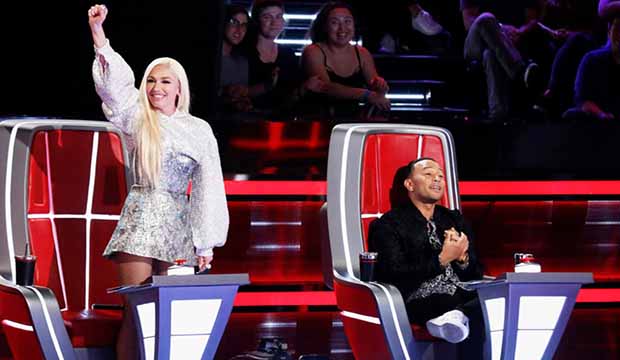 Who will be the unfortunate artists to be eliminated on Tuesday’s episode of “The Voice”? It’s a one-hour installment for Night 4 of the battles for Season 17. Coach Kelly Clarkson is the only one completely out of saves and steals for this year. John Legend and Blake Shelton have already used their only saves of the year. Gwen Stefani has a save remaining. Here is a summary for each coach:

Blake Shelton (one steal, no saves)

Gwen Stefani (no steals, one save)

Kelly Clarkson (no steals, no saves)

John Legend (one steal, no saves)

If you’ve missed any blind auditions or battle episodes or want to read our Gold Derby analysis, visit the links below to catch up on our coverage:

And now make your comments below and keep refreshing for our full live updating blog recap on Tuesday, October 22:

8:00 p.m. — We pick right up where Monday night left off. After Kendal Inskeep defeated James Violet in a battle to remain on Team Gwen, John launched his steal button while Gwen enacted her save. Now James has a choice: Does he want to stay with Gwen? Or test out a new coach in John? After careful consideration, James ditched his coach for John, shattering Gwen’s heart. People may have been sleeping on Team Gwen, but both Kelly and John have used their only saves on Gwen’s castoffs.

8:15 p.m. — Up next is a battle between two of Blake’s most popular country singers: Cory Jackson vs. Zach Bridges. They’ll be sparring off on Toby Keith‘s hit “Should’ve Been a Cowboy.” Blake thinks Zach has the edge in this duo’s lower register, but Cory can hit the high notes. At the end of the day, Blake just wants to see which of these two can make him believe they want to be a cowboy. As they launch into the performance, I have a preference for Zach’s voice, but Cory’s star power and stage presence seem to be overpowering Zach. Kelly exclaims that she wishes they were a duo, John gives the slight edge to Zach and Gwen thought Cory stole the show. But it’s Blake who has the final decision and he has chosen Zach to move forward! Cory has been eliminated from the competition.

8:35 p.m. — The second battle of the night will be Team John’s Dane & Stephanie vs. Marybeth Byrd. John felt this trio would sound fantastic harmonizing on “Burning House” by Cam, but Marybeth is intimidated singing with the twins. Dane, on the other hand, is feeling insecure about his transitioning voice. John encourages Dane not to shy away from the spotlight on the big stage. During their performance, Marybeth stands out as the star to me and it looks like she held up her concert for a jam session with her backup singers. Gwen holds off on picking a winner, Kelly prefers Dane & Stephanie and Blake says Marybeth will be in this season’s finale. After giving it some thought, John has chosen Marybeth as the winner of this battle. Dane & Stephanie have been eliminated.

8:59 p.m. — Gwen is freaking out about her next battle: Rose Short vs. Jessie Lawrence. These two have both walked difficult paths in life, but now they’re each singing “I Can’t Feel My Face” by the Weeknd to hold their place on Team Gwen. Gwen and Will.I.Am try to instill confidence in the duo, both of whom have some issues with self-esteem. Everyone agrees Rose is a force of nature so she may have the upper hand in this battle. As they hit the main stage, Rose definitely has natural presence but I love how Jessie moves around the stage. In fact, I would choose Jessie as the winner of this battle if it were up to me. Vocally he’s no slouch and he knows how to entertain. First of all, the crowd LOVES these two. Kelly wants to drink with them, Blake refuses to pick a winner and John leans towards Rose. Gwen gushes over both but ultimately picks Rose as the winner of this battle. Moments later Gwen pushes her save button for Jessie, but Blake challenges with a steal! Next, Blake tells Jessie that Gwen is the right coach for him, Blake just wanted to show Jessie how much he deserves to be on this show. Jessie appreciated the comment but decided to stay on Team Gwen. That’s a wrap for tonight!