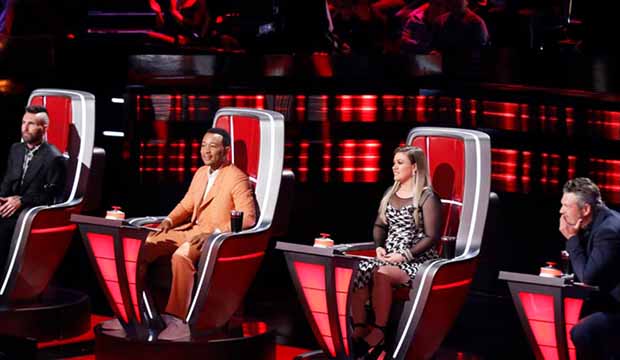 Tuesday’s results show for “The Voice” promises surprising eliminations, steals and saves. Coaches Kelly Clarkson, John Legend, Adam Levine and Blake Shelton face a situation they’ve never had before following Monday’s first ever Cross Battles round. Which of their artists will even be around for the Top 24 show in just two weeks?

As of this afternoon, there were 32 contestants remaining, but that will change tonight. Voters throughout America have been voting for the past 24 hours for their favorites in the eight battles from Monday evening. Eight losers could go home, but each coach has one steal (from another team) and one save (from their own team) that can be used tonight or next Tuesday night. The Emmy-winning program on NBC is hosted by Carson Daly.

Here is a full list of the 16 contenders who performed last night and are waiting on the public vote tonight:

John’s Maelyn Jarmon (“Mad World”) vs. Adam’s Rod Stokes (“How Am I Supposed to Live Without You”)

All throughout this season, we continue our tradition of updating live blogs while each episode is airing for the east and central time zones. Follow along below and keep refreshing during the show. Make your own comments about which artists you like and don’t like for this spring cycle. Read our full minute-by-minute analysis for the battles on Monday, March 25, Monday, April 1, Monday, April 8 and Tuesday, April 9. Plus enjoy our recap for Monday’s first Cross Battles two-hour program.

And now follow along and refresh our live updating blog below for the Season 16 Cross Battles results show for Tuesday, April 16:

8:00 p.m. – After a night of historic Cross Battles where artists from opposing teams battled live, the winners will be revealed tonight! We will also see a performance from Coach Legend himself. Each coach has one steal and one save to use over the course of the next two weeks. That is is good news for any coach whose team may be nearly wiped out in this new format. Let’s get started!

8:05 p.m. – Legend kicks off the episode showing the contestants how it’s done with his new single “Preach.” The song conveys the message that people need to be the change they hope to see in the world, don’t just preach about it. Now it’s time for some results!

8:10 p.m. – The first Cross Battle coming to an end is Team Blake’s Kim Cherry vs. Team Kelly’s Betsy Ade. Blake says he’s honored that Kim chose him as his coach and he hopes she never regrets that even though they play that loop over and over again. Kelly is hoping America voted Betsy through because she’s been a fan since before she stole her from John. The artist advancing in the competition is…Kim! Before Betsy has a chance to say anything, both Adam and John hit their Steal buttons! Adam says John already let her go and it would be an amazing experience to work with her. John admits he made a rookie mistake in pairing her up with the wrong person and he wants her back on his team. Betsy is torn about making this decision, but can’t deny the opportunity to work with three coaches. She chooses to join Team Adam!

8:15 p.m. – The next result is Team Kelly’s Matthew Johnson vs. Team Adam’s Domenic Haynes. Kelly says she can’t see Matthew going home, but she’s nervous after losing Betsy. Adam isn’t sure how this is going to shake out but he can’t imagine a world where Domenic isn’t on his team. The artist advancing is…Matthew! Kelly is thrilled not to lose her second artist in a row. Adam instantly uses his Save on Domenic, and just like that, Adam has used his Steal AND his Save!

8:20 p.m. – We quickly move on to Team Legend’s Maelyn Jarmon vs. Team Adam’s Rod Stokes. John says Maelyn’s voice is special and he’s happy to be her coach. Adam says he hasn’t much time with Rod, but he was blown away by his performance. The winner of this Cross Battle is…Maelyn! Kelly quickly hits her Steal button and is convinced that even if America doesn’t get Rod yet, they will when she’s on his team. Wow! The coaches are blowing their steals and saves early. The remaining contestants can’t feel great about that.

8:30 p.m. – Team Adam’s Celia Babini and Team Blake’s Oliv Blu are in the hot seat next. Adam says Celia is amazing and this is the beginning of her journey. Regardless of whether she makes it to the end or not, Adam has full belief in her. Blake believes in fate and he thinks there’s a reason Oliv wound up on his team. He couldn’t be more proud of her and honored to be her coach. The winner of this Cross Battle is…Oliv! And BOOM! John steals Celia. Do these coaches know half the artists haven’t even performed yet? We’re halfway through the show and nobody has gone home. I have a feeling these coaches are going to regret their fast hands next week.

8:40 p.m. – Next Team Kelly’s Presley Tennant is facing off with Team Legend’s Kayslin Victoria. Kelly says last night was the best she’s ever heard Presley. To come out at 16 with that much range and volume is incredible. John has loved working with Kayslin and thinks she has a special, powerful voice. The winner of this Cross Battle is…Presley! Kayslin had to awkwardly speak for 10 seconds and become the first artist nobody saved. That was awkward.

8:45 p.m. – Team Legend’s Lisa Ramey vs. Team Kelly’s Karen Galera are up next. John loves working with Lisa because he personality and stage presence are so strong. Her light beams out energy to everyone that’s around her. Kelly appreciates how hard Karen works and loves what she represents as the only bilingual artist on the show. The winner of this Cross Battle is…Lisa! Karen becomes the second artist to go home tonight.

8:50 p.m. – It’s time to find out who won the heated Cross Battle between Team Adam’s Mari vs. Team Blake’s Selkii. Adam tells Mari that he loves her. He thinks she’s so special and someone he can’t bare the thought of not having on his team. Blake tells Selkii that she’s one of his favorite artists that he’s ever worked with because of her work ethic and talent. The winner of this Cross Battle is…Mari! But Blake has used his Save button to keep Selkii! Blake wants his entire team to advance to the next round, so decided to use his save on his first artist at risk of leaving.

8:59 p.m. – Tonight’s final result is the Cross Battle between Team Blake’s Dexter Roberts and Team Adam’s Andrew Jannakos. Blake tells Dexter he’s a fan, first of all, and that Dexter is one of the best country singers that has ever walked across this stage. Adam says Andrew should advance, but if he doesn’t he should drive to Nashville immediately and get a record deal because he looks cool. Okay. The winner of this Cross Battle is…Dexter! Andrew has been eliminated. That’s a wrap for this week! The coaches were a little loose with those steals and saves tonight. There could be some brutal eliminations of artists who deserve to stay next week. I guess we’ll find out!