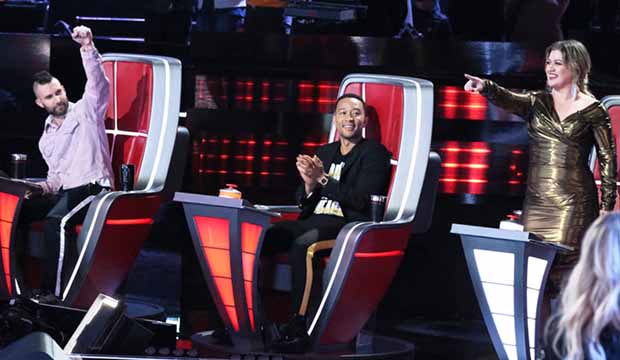 Which artists will be the final ones moving on to the Top 24 on “The Voice” for Season 16? Much of that rides on Monday’s live performance episode on Night 2 of the Cross Battles. Coaches Kelly Clarkson, John Legend, Adam Levine and Blake Shelton have a total of 16 singers facing off for this two-hour event. You can vote for your favorites right after this show ends Monday night. Tuesday’s results program will find eight eliminated, but there are two coaching saves and one steal remaining, so a total of 11 of them will be safe.

Here are the competitors performing tonight:

All throughout this season, we continue our tradition of updating live blogs while each episode is airing for the east and central time zones. Follow along below and keep refreshing during the show. Make your own comments about which artists you like and don’t like for this spring cycle. Read our full minute-by-minute analysis for the battles on Monday, March 25, Monday, April 1, Monday, April 8 and Tuesday, April 9. Plus enjoy our recap for last Monday’s first Cross Battles two-hour program and last Tuesday’s results show.

And now follow along and refresh our live updating blog below for the Season 16 Cross Battles performance show for Monday, April 22:

8:01 p.m. – After last week, Blake steal has his steal available to him and Kelly and John both have their saves. In addition, unlike in Round 1 of the Cross Battles, tonight voting opened as soon as the show began since all the artists that would perform were known to the audience.

8:02 p.m. – We kicked off the night with Adam calling for LB Crew to battle against an artist of Team Kelly. She chose Jej Vinson, hoping for a big vocal showdown.

8:04 p.m. – In the battle, LB sang the spiritual “Wade in the Water,” a song associated with songs of the Underground Railroad. LB’s performance was passionate and moving, perfectly reflecting the deep and rich texture of his voice. Jej followed that with the more subdued “Versace on the Floor.” Jej’s song choice offered him the opportunity to show off his incredible range and consistency, but compared to LB it rang much more hollow to me.

8:09 p.m. – Adam and Kelly were both proud of their guys, highlighting the confidence they both showed in their song choices. When asked, John gave the edge to LB for his command over the stage and bringing something so powerful to the show. Blake agreed, and though he gave Jej credit for meeting his already high expectations he was more impressed by LB for being a surprise.

8:13 p.m. – Adam got to start the next battle as well, picking Kalvin Jarvis to go against someone from Team John this time. John chose Julian King, the artist that he had used his blind auditions block against Adam on!

8:16 p.m. – Kalvin put a new spin on “New Rules” by arranging it into a slower, R&B track. He managed to inject the track with a desperation I never really saw in it so in that way he truly did make it his own. Julian also took on a female song, going with “Hello,” and managed to make it his own by singing some lyrics in Spanish. His range was front and center, though the tempo of the song was a little off.

8:26 p.m. – In his critique, Adam told Kalvin that he gave a “frontrunner performance,” highlighting the way he turned the song on its head. For Kelly, this battle came down to song choice and interpretation and for her it was Kalvin that was better at it. Blake was impressed by Julian because he “swung for the fence” and it caught his attention for a possible steal tomorrow night.

8:29 p.m. – Blake was in charge of starting off the next battle with Carter Lloyd Horne to go against one of John’s singers. He plucked Jacob Maxwell off the couch in order to pit “heartthrob” against heartthrob.

8:36 p.m. – With “Way Down We Go,” Carter definitely proved that he can be one of the male artists that drums up the support of the female voters. The bottom register of his voice that the song hung in was sexy and soulful with slight hints of country rock. Jacob went with the country song “You’re Still the One,” a track that is more classically romantic, and though he sang it really well his stage presence wasn’t as engaging as Carter’s and left something to be desired.

8:41 p.m. – Blake made a pitch on behalf of Carter that viewers go back and watch his former performances in order to see how much he’s grown over the competition. John told Jacob that he’s actually special because his voice doesn’t require “fireworks” in order to have an impact.

8:48 p.m. – When duties fell to Kelly for the first time tonight, she let Blake choose who could go against The Bundys. He accepted the challenge by throwing Andrew Sevener into the ring to take down the trio.

8:50 p.m. – The uptempo “The Letter” gave The Bundys a chance to have some fun with each other on stage, but when they weren’t in their harmonies they struggled to really grab a hold of the song. Overall the performance felt like the whole team performances that the show does on results night throughout the season–a handful of solo artists awkwardly making a song into a group effort. Andrew’s “Modern Day Bonnie and Clyde” was a much more lived in performance and he really dug into the vocal with his grit and rock rasp.

8:56 p.m. – Kelly acknowledged that The Bundys have a harder time making their harmonies work on the live shows, but that they did a great job and the uniqueness of what they represent to the season is worth the votes. Blake gave Andrew props for covering a hard song to take on and doing it well.

8:58 p.m. – For the fifth battle John got to choose which of his artists would be next. He asked Shawn Sounds to go against one of Blake’s remaining two artists. He sent Karly Moreno up to the stage in, I think, the first male-female match up of the round!

9:00 p.m. – Shawn’s cover of “Lay Me Down” was smooth and controlled, but when he erupted into the big chorus at the end he let his voice soar in one of the most crowd-pleasing moments of the night so far. Karly’s “Down” was interesting, incorporating a lot of scat which might be a tough sell to the voting audience because it’s so non-traditional compared to the other song choices.

9:10 p.m. – John told Shawn that he was surprised by how low he took his voice tonight and Blake thanked Karly for a different type of artist for the show and especially for taking on different songs. For Kelly it was an odd pairing that made it hard to pick one over the other, but Adam was comfortable agreeing with Blake about how unique and special Karly is.

9:13 p.m. – When it came time for Adam to choose an artist he only had Kendra Checketts left and then chose John who picked Jimmy Mowery, the artist he stole from Team Adam last round.

9:20 p.m. – “Cold Water” was the kind of big song made for Kendra’s powerful voice and man did she deliver. I liked the restraint she showed up until the end when she held a couple of big notes beautifully. Jimmy’s choice of “Mercy” was very smart though because it’s a more well-known song and is right in his own wheelhouse. He actually ended up meeting Kendra on her level and hit some big notes of his own!

9:25 p.m. – Adam and John were both proud of their powerful vocalists, but Blake gave the win to Kendra out of loyalty and then Kelly chose her as well saying that she was a big surprise and that she loves her tone and ability to convey the message of the song.

9:32 p.m. – With two artists left, Kelly had the next choice for a battle against John or Blake. She went with Rebecca Howell to go against Team John’s Beth Griffith-Manley.

9:35 p.m. – Rebecca took on “Any Man of Mine” for a fun and upbeat foot-stomper, performing it in the original arrangement and not much different vocally either. Beth’s “I Put a Spell on You” was more of a reinterpretation and even if that wasn’t enough to win you over then her incredible vocal would. She, without a doubt, gave the performance of the night.

9:44 p.m. – Kelly and John loved both of the performances, but John’s passion for Beth’s was noticeable. Blake was happy to give Rebecca praise for surprising him and also found time to give Kelly crap for letting her go in the previous round. Adam also gave the impression that Beth was the winner of the battle, but he did call Rebecca the strongest country singer in the competition!

9:47 p.m. – With only two artists left, the final cross battle came down to Blake’s Gyth Rigdon versus Abby Kasch.

9:53 p.m. – Gyth took on a song his coach covered, “Goodbye Time,” and immediately challenged what Kelly said a moment ago–I would call Gyth the best country vocalist in the competition because he delivered the most dynamic and genuine country vocal so far. Abby closed out the night with “Cupid’s Got a Shotgun,” a song Kelly prefaced as being the perfect song for her. Sure enough it was a good vocal, but an even better performance–she was high energy and had a ton of fun on the stage.

9:58 p.m. – Both Blake and Kelly applauded the song selection by their artists and remarking that their performances were spot on for the songs. Adam said that Abby was fantastic, but she was up against stiff competition, saying that Gyth is an artist that will be in the finale.