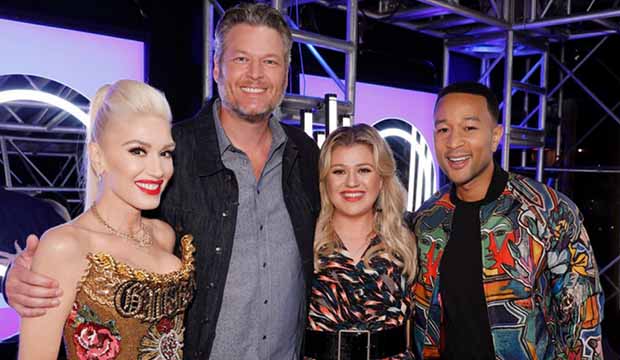 Tuesday night on “The Voice” featured a bloodbath like no other, as the Top 20 artists of Season 17 were cut down to the Top 13. The seven contestants to be voted off of NBC’s reality TV show were: Damali of Team Kelly Clarkson, Gracee Shriver and Ricky Braddy of Team Blake Shelton, Jake HaldenVang and Kyndal Inskeep of Team Gwen Stefani, and Alex Guthrie and Khalea Lynee of Team John Legend. Which artist do YOU think was most robbed? Vote in our poll below.

Damali performed “You Say” during the live show. Kelly proclaimed, “Damali is the dark horse on my team. Her voice is so pure, but like raw. She’s incredible. She just draws you in.” Damali’s previous songs were “Ocean Eyes” in the blind auditions, “Set Fire to the Rain” in the battles and “Sober” in the knockouts.

SEEMax Boyle: 62% of ‘The Voice’ viewers want him to win for Team Kelly Clarkson [POLL RESULTS]

Gracee took on “American Honey” on Monday night. “The fact that Gracee is on Team Blake now and we can start selecting songs to fit her unique tone and style, this is gonna be a deadly competition,” Blake promised. Gracee’s previous songs were “Rainbow” in the blind auditions, “Blue Ain’t Your Color” in the battles and “Leave the Pieces” in the knockouts, which is when Blake stole her from Team Kelly.

Ricky sang “Roll With It” in the playoffs. Blake remarked, “Every time Ricky gets on that stage, he does something vocally that I didn’t even know he was capable of. You put that in a live competition, it’s really gonna get exciting.” Ricky’s previous songs were “River” in the blind auditions, “Valerie” in the battles and “She Talks To Angels” in the knockouts.

SEERose Short: 35% of ‘The Voice’ fans want her to win for Team Gwen Stefani [POLL RESULTS]

Jake chose “Turning Tables” for his live performance. Gwen announced, “Somebody to watch out for in the live shows is gonna be Jake. He is an incredible singer. He could be somebody that’s like, ‘Whoa, we didn’t see that coming.’” Jake’s previous songs were “Wish I Knew You” in the blind auditions, “Just Like a Pill” in the battles and “Powerful” in the knockouts.

Kyndal picked “10,000 Hours” for Monday’s show, whom Gwen referred to as someone who has a “super original sound.” Her coach continued, “She just has so much style to her voice. Those are the kinds of singers I’m always looking for and I got one with Kyndal.” Kyndal’s previous songs were “Never Been to Spain” in the blind auditions, “I Could Use a Love Song” in the battles and “Elastic Heart” in the knockouts.

Alex’s song choice in the playoffs was “If I Ain’t Got You.” “I stole Alex from Team Kelly,” John reminded the audience. “He’s such a talented singer. He’s soulful. I think he has that kind of voice that is pretty flexible.” Alex’s previous songs were “Love and Happiness” in the blind auditions, “Home” in the battles and “I’m Not the Only One” in the knockouts, which is when John stole him from Team Kelly.

Khalea performed “Love Like This” live on stage. John stated, “Khalea is a full-time mom. She put music on the back burner for a while, but hearing her sing you’re like, whoa, what the world was missing out on. She has a honey tone, so much control. She is one of the singers to beat. ” Khalea’s previous songs were “Best Part” in the blind auditions, “The Boy Is Mine” in the battles and “Because You Loved Me” in the knockouts.