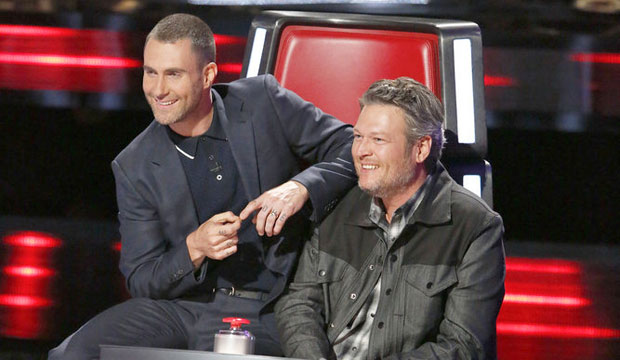 The Final 32 artists on “The Voice” Season 16 are about to embark on a brand new round of competition known as the Live Cross Battles, and the coaches couldn’t be more worried. “It’s the wild west out there now,” Adam Levine warns his artists in the preview trailer from the end of Tuesday’s episode. “I get to save somebody, I get to steal somebody, and everybody else is chosen by America,” he adds. That’s right, “The Voice” viewers — for the first time this season you get to have a say in who stays and who goes, and it all begins Monday, April 15 on NBC.

SEEFinally! Blake Shelton uses ‘The Voice’ steal for [SPOILER], but did he save the best for last? [WATCH]

“You don’t find out who you’re battling until you walk on stage,” declares a bug-eyed Kelly Clarkson.

“Welcome to the Cross Battles!” shouts Blake Shelton as he holds his arms in the shape of an X.

In case you missed our previous reporting, the Live Cross Battles have already been popularized in several other versions of “The Voice,” including Holland, China, Brazil and Thailand. Instead of the usual Knockout rounds, when two artists from the same team face off head-to-head and their coach decides who to advance and who to send home, the Cross Battles challenge two artists from different teams to duke it out on live television with the at-home audience voting their favorites into the Finals.

SEEAdam Levine totally just teased Kelly Clarkson on ‘The Voice’: I listen to ‘A Moment Like This’ every day ‘in the bubble bath’

At first glance, “The Voice” fans seem to be in love with this new twist. Below, see a brief sampling of their reactions and then be sure to give us YOUR thoughts by sounding off down in the comments section.

Glenn Triller: “I think it’s fine just as long as the show doesn’t go the route of ‘AGT’!”

Julie Rose: “Love the idea now we can vote for who we want instead of who judges pick. I mean we are the ones that will buy the music.”

KW: “I LOVE the possible switch! I just said last week that it is so sad that the best singers on the same team have to battle against each other. Having the audience vote is great idea!”