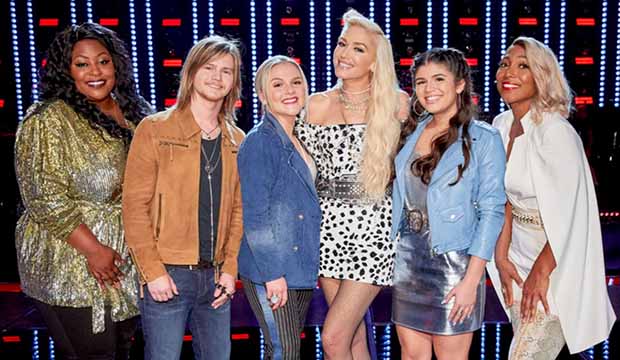 When the live playoffs kick off Monday night on “The Voice,” we’ll get our first glimpse at how the artists of season 17 manage the pressure of live television. For Team Gwen Stefani this is going to be a huge test — none of the five artists still standing on her team have stood out as the top performers of the season. But that also means that collectively they have the best chance at surprising the audience and giving us a breakthrough moment that one or more of them can ride for the weeks to come.

Gwen, in her fourth time coaching, is looking for her first win. Does she have a winner in Jake HaldenVang, Myracle Holloway, Kyndal Inskeep, Rose Short or her newly stolen artist Joana Martinez? Read my thoughts and ranking of Team Gwen below and then let me know what you think down in the comments!

1. Kyndal Inskeep
(Blinds: “Never Been to Spain”; Battles: “I Could Use a Love Song”; Knockouts: “Elastic Heart”)

Kyndal’s strength is that her voice lends itself to her comfort zone of country music, but can also extend into something as dramatic as Sia, as she proved in an excellent knockout performance. She strikes me as one of Gwen’s favorites in the competition and so I think every chance she gets Gwen will save her. But that’s not going to be necessary–she is already Gwen’s best hope at a spot in the finale. And, right now, I think she’ll get there.

The variety in Joana’s three performances so far speaks for itself and it speaks loudly. She’s managed to curate a diverse set of songs while maintaining her own signature power vocal in each of them and I think that makes her a strong candidate on Team Gwen. Speaking of Gwen, she wanted Joana in the blinds, but lost her to Blake who finally let go of her in the knockouts. As a late addition to Gwen’s team obviously she’s a step behind the others, but I truly think Gwen has been waiting to get her shot at Joana and plans to take her as far as she can.

The common thread in all of Myracle’s performances has been her unmatched ability to evoke the deep pain and emotion of the lyrics in her voice. She’s not a far cry from Mary J. Blige in that regard, and that kind of talent makes her something unique in this field of artists. I am really disappointed that the producers trimmed her knockout performance down to such a short clip because I would have loved to see more of what she did there, but hopefully we’ll see her turn the dial up in her first live performance and announce herself as the dark horse I think she is in the competition.

As one of the few pure rock artists left in the competition, Jake has a bit of a leg up on not only his own team, but the rest of the field as well. He’ll have a huge grasp on that niche of voters that at one point were a pretty strong block within the audience. But rock guys have struggled recently and while Jake is obviously talented, I don’t find anything terribly unique about him.

I find Rose’s delivery to be fairly inconsistent, but when she settles down with a chorus she soars. Her range is incredible, there is no doubt about that, but without the big notes I think the audience is going to be left underwhelmed. And if there’s a dependency on big moments the audience might get bored week to week. In that regard I think she’ll have a hard time finding her spot in the playoffs.