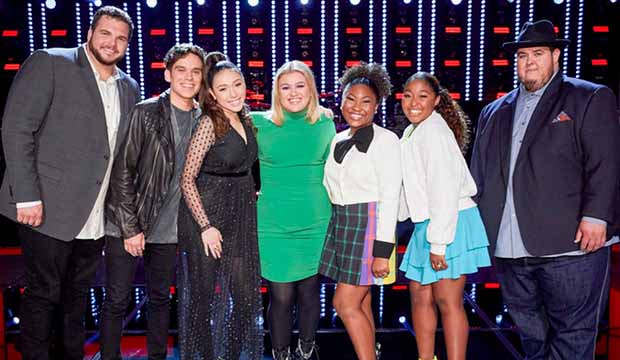 Two-time coaching champ Kelly Clarkson is looking for her third win on Season 17 of “The Voice.” After blind auditions, battles and knockout rounds the powerhouse vocalist and talk show host has winnowed her team down to five artists she believes can win. But which of them has the best chance? See our best-to-worst rankings for Team Kelly below.

Next Monday and Tuesday “The Voice” will transition from its pre-taped rounds to live shows where the audience has a say in who stays and who goes. In these Live Playoffs, each of the four teams of five coached by Clarkson, Blake Shelton, Gwen Stefani and John Legend will compete for just three spots in the following round. Two of those spots will be determined by the audience votes and the last one by coach’s choice. Then, the remaining artists from each team with the highest votes will have a chance to compete for a special Wildcard slot to round out the Top 13.

Below we rank Kelly’s team based on our impressions of their three performances so far this season as well as the likelihood that they’ll be one of the three to advance.

Myla Finks and Chelsea Grover are the 14-year old powerhouses that make up the duo Hello Sunday. Although they only managed to turn one chair in their blind audition, Hello Sunday has catapulted themselves to the top of Team Kelly after blowing viewers away in the battle and knockout rounds. Their tight harmonies, incredible range and absolutely adorable personalities are impossible to forget. Not only are they the only duo remaining in the competition, they’re the youngest artists as well. Kelly has won twice before with teenagers and we think they may be her best shot at returning to the winner’s circle.

2. Max Boyle
(Blinds: “Wayfaring Stranger”, Battle: “Let Me Love You”, Knockout: “When the Party’s Over”)

Although Kelly turned her chair for Max in the blinds, John blocked her attack and had the pop rocker all to himself when Blake and Gwen opted not to push their buttons. Max won his battle but remained under the radar until his breakout performance in the knockouts. John ultimately chose Katie Kadan to advance over Max and Kelly jumped at the second opportunity to bring the Ohio native onto her team. Max is a charismatic singer who seems to improve with each round. We think he may just be the dark horse to steal the crown this season.

Damali was able to convince just Kelly to turn her chair in the blinds, but since then she has grown leaps and bounds. She sailed through the battle round and took down arguably the most marketable country singer of the season in Gracee Shriver during the knockouts. Her range and storytelling ability make up for what she currently lacks in stage presence. Even if she fails to earn enough votes to get her into the Top 13, Kelly’s bond with this teenager may be enough to save her.

Jake was just a one-chair turn but since his blind audition he’s proven to be one of the best country vocalists of the season. While country music has seemed over-represented in some past seasons, there’s actually not much direct competition for this Tennessee crooner. Jake is likable, has a good voice and…well, we can barely remember a time when a bearded country singer wasn’t part of “The Voice” finale. Should it come down to it, we think Jake has a good shot at earning the wildcard slot to make the Top 13.

Shane was a four-chair turn when he blew all the coaches away during his blind audition, so it may be surprising to see him on the lower tier of Team Kelly. There may not be a better pure vocalist than Shane, but his own insecurities and shy personality are getting in his way. While his voice never fails to impress, his stage presence leaves much to be desired. If he can’t figure out a way to break out of his shell, this balladeer isn’t going to be able to connect with enough viewers to win.