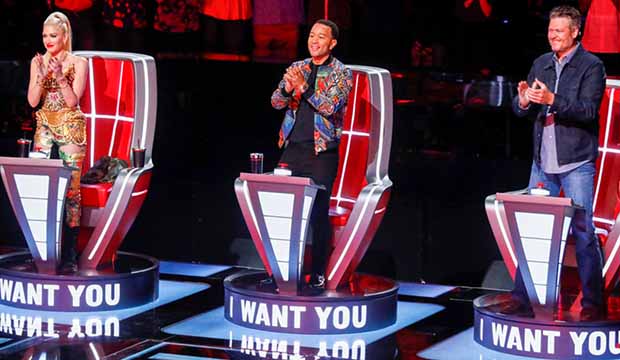 It’s a special blended edition of “The Voice” on Monday as the blind auditions wrap up and the battles begin, all in a single two-hour episode. Who do you think will be the champion artist and coach for this Season 17? John Legend is the reigning champ among coaches, winning last spring for his first season on the NBC reality TV show. Kelly Clarkson was the winning coach for Season 14 and Season 15. They are up against six-time winner Blake Shelton and returning coach Gwen Stefani, who has yet to have a winning singer.

All throughout the one-hour episode, refresh this screen for the most up-to-date recap while this episode is airing Tuesday on the East coast.  Battle round advisors will be Normani (Team Kelly), Will.i.am (Team Gwen), Usher (Team Legend) and Darius Rucker (Team Blake). For the upcoming knockouts later on, Taylor Swift will be the Season 17 mentor.

And now make your comments below and keep refreshing for our full live updating blog recap on Monday, October 14:

8:01 p.m. – First up in this last stretch of the Blinds was Zoe Upkins, an R&B/pop/soul artist who took on Monica‘s ballad “Angel of Mine.” The audition inspired three quick turns from Blake, John and Kelly while Gwen held out. Kelly liked that Zoe sounds young and because she’s had a successful run with young female artists before she wanted to work with her. But John had one spot left on his team and he was ready to fill it — he even sang a bit of “The Boy Is Mine” in order to convince Zoe to be his final artist. And that she did!

8:10 p.m. – Next to audition was Matthew McQueen, no relation to Steve McQueen, for his chance to fill Kelly, Blake or Gwen’s last spot. He took on Lewis Capaldi‘s current hit “Someone You Loved,” and after almost an entire song with no turn suddenly Matthew had the choice to make between Kelly and Blake. Kelly waited because she wanted to see if he’d get nervous about no one turning and she liked that he didn’t. But in the end Matthew decided to join Team Blake based on a dream that his family members had previously had!

8:18 p.m. – High school tennis player Gracee Shriver was up next with her take on “Rainbow” by Kacey Musgraves. With Blake’s team full both Gwen and Kelly were ready to take advantage of Gracee’s strong country voice. Both women were drawn to her unique sound, but Gracee was more drawn to Kelly’s connection to her personal idol Kelsea Ballerini.

8:35 p.m. – Gwen was the last coach with a spot to fill and she was looking for an artist that really connected to the lyric of the song. That brought EMT driver Ty Mauro to the stage with this rendition of “Let’s Stay Together” by Al Green. In his audition he showed his range, including a deep rasp, but it wasn’t what Gwen wanted and so she didn’t turn her chair.

8:39 p.m. – Content to be picky, Gwen listened as Caroline Reilly took on Jefferson Airplane‘s “Somebody to Love.” Hoping for a young female artist she could mentor, Gwen was pleased to turn around and discover that Caroline is only 16 years old, but even more happy once it was clear that she’s a rock artist that enjoys classic rock!

8:49 p.m. – For the first time in series history the coaches get a save in the Battles, giving them the ability to try to keep both artists that they paired against each other. Typically these have been reserved for the Knockouts.

8:55 p.m. – John’s team went in battle first with advisor Usher. Four chair turn Khalea Lynee was up against Zoe Upkins for “The Boy Is Mine” by Brandy & Monica. This was Zoe’s second time performing Monica on the show and she continued to impress John with her range while Usher was taken with the “waviness” of Khalea’s voice.

9:05 p.m. – In the performance both women worked the stage like they owned it, showing a confidence rare for artists this early in the competition and certainly for artists as young as Zoe. Vocally Khalea had the edge, due in large part to her experience, but also for taking Usher’s notes to heart. John thought that Zoe showed significant growth from the Blinds and that Khalea is extremely polished. In the end he kept the artist he finds to be more versatile: Khalea!

9:11 p.m. – As promised, Kelly went in for the Steal on Zoe, but so did Gwen and John also used his Save in order to keep her on his team! John said that he messed up in pairing them together and he was so impressed by how well she took advice. Kelly pitched that she could do really well on song selection with Zoe and Gwen promised to help build her stage presence even bigger from where it is already. But unsurprisingly Zoe stayed loyal and kept her place on Team John!

9:19 p.m. – In the next Battle, Josie Jones was pitted against Kat Hammock in Team Blake’s first pairing based on their “rootsy” voices. They met with Blake and Darius to rehearse their song “Take Me Home Country Home” by John Denver, a song Darius thought might be too difficult for them, but Blake thought perfectly blended genres. Darius found Kat’s voice “sweet and special,” but notes for her were to make sure she matches Josie’s power and to loosen usher body language.

9:30 p.m. – Josie started the Battle with her unique country twang and then Kat followed with a few soft lines before the two harmonized perfectly for the chorus. As the song built both women’s voices gained in strength, but Kat remained timid in her stage presence. All the coaches agreed that Josie gave the better performance overall, but that Kat’s voice is so sweet and unique that she had an edge there. Blake based his decision on his experience and picked the artist he thinks will do better on the show: Kat!

9:40 p.m. – Kelly and Norman came through for the final Battles of the night, giving Melinda Rodriguez and Shane Q the Sam Smith song “Too Good at Goodbyes.” Kelly thought Melinda’s best move forward was to get out of her head and let herself go in the performance. Normani considered Shane a top contender for his soulfulness.

9:52 p.m. – Going into the Battle Kelly wanted to see which of the artists would be better at harmonizing. In that regard the two were perfectly matched and both succeeded in their contributions to the song. Shane definitely relied heavily on vocal tricks while Melinda settled into a smooth rhythm with her voice. After the other coaches all gave the edge to Shane, Kelly chimed in to say that Melinda executed everything flawlessly. In the end her decision came down to the unexpected factor and that meant keeping Shane!

9:57 p.m. – But Kelly wasn’t done — she used her Save to keep Melinda! And then John hit his button to Steal her! John argued that though he gave Shane the win in that Battle he thinks she deserves to be on the show, but she knew what she had to do: stick with Kelly!

While you can’t predict “The Voice” until the live shows start, be sure to make your predictions for all of our other reality shows to influence our racetrack odds. You can keep changing your predictions until new episodes air and compete to win a spot on our leaderboard and a $100 Amazon gift card. See our contest rules and sound off with other fans in our reality TV forum. Read more Gold Derby entertainment news.