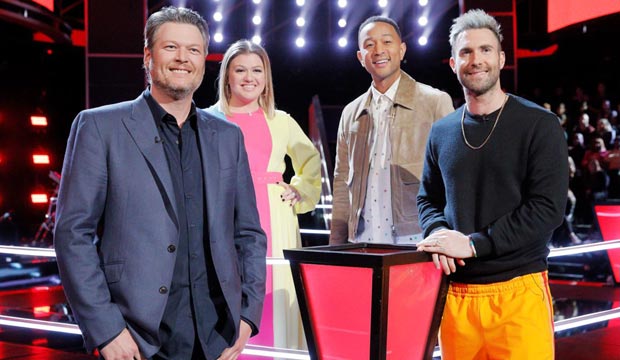 After the dust settled on Tuesday’s cutthroat Top 24 live results show for “The Voice” Season 16, only 13 artists still remained in the competition. Both Adam Levine and Kelly Clarkson have two contestants apiece heading into the Finals, while John Legend has three and Blake Shelton has — wait for it — six. Get a closer look at the Top 13 in our photo gallery above and then make your predictions at Gold Derby for who you think will win and who’ll be eliminated next in the live shows.

Team Adam was hit with a major blow after America failed to vote any of his four singers through to the next round. Adam chose to save Mari, while LB Crew re-joined this team after proving victorious in the online companion series the Comeback Stage. Adam’s three eliminated singers were Betsy Ade, Domenic Haynes and Kalvin Jarvis.

Team Kelly also enters the Finals with two artists: Rod Stokes thanks to America’s vote and Jej Vinson thanks to Kelly’s save. Ironically, Kelly began Season 16 complaining that she had no male artists on her team and now she only has men remaining. Kelly’s four eliminated contestants were Rebecca Howell, Matthew Johnson, Abby Kasch and Presley Tennant.

SEEJej Vinson takes on ‘Love Lies’ for Kelly Clarkson during ‘The Voice’ Top 24 week — Will he advance to next round? [WATCH]

Team Legend was lucky enough to get two artists voted into the Finals by America: Maelyn Jarmon and Shawn Sounds. For his save he went with Celia Babini, and rather unsurprisingly we might add since he raved about her at the top of the show. John’s three eliminated artists were Jacob Maxwell, Jimmy Mowery and Lisa Ramey.

Team Blake towers over all of his competitors with a whopping six contestants heading into the Top 13. America voted through Kim Cherry, Carter Lloyd Horne, Gyth Rigdon, Dexter Roberts and Andrew Sevener, with Blake then opting to save Oliv Blu. Blake’s two eliminated ladies were Kendra Checketts and Selkii.