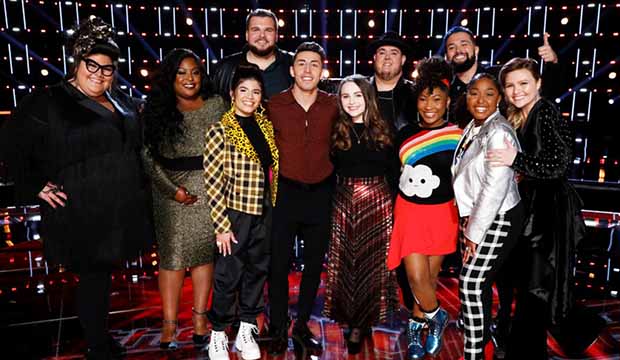 The Top 10 episode for Monday’s “The Voice” is part of “Challenge Week” for these contenders, so who will live up to the hype this time? After tonight’s Live Playoffs, you can then vote for the contestants you want to move forward on Tuesday evening’s results show. Seven singers will be safe while three will face off for an Instant Save and a move into next week’s Top 8. Make your predictions below for the Season 17 championship and which two artists will be eliminated this week.

We just published our power rankings over the weekend, listing our reasons for ranking best to worst for the Top 10. Do you agree or disagree with our choices? Here are the remaining contestants in our order for Season 17:

And now make your comments below and keep refreshing for our full live updating blog recap for Live Playoffs Top 10 performances night on Monday, December 2:

8:01 p.m. – Tonight’s first performance came from Rose Short, Gwen’s strongest contender of the season. Diverting once again from her own genre, Rose took on Blake’s song “God’s Country” this week. Rose turned the song on its head, making it into a booming vocal performance in the choruses as if it was made for a big female gospel/soul voice. But I also liked that she brought it down in the verses to show that she doesn’t just rely on the big moments. When the choir on stage with her joined her in the finale stretch of the song it was a really good moment for her–one I’d think they might have saved as the encore performance of the night!

8:09 p.m. – Blake was highly complimentary of Rose’s arrangement and what she did with the song, as was Kelly who was impressed with how she didn’t take it too far over the top with the big notes.

8:14 p.m. – Prior to performing her rendition of Selena Gomez‘s “Lose You to Love Me,” Marybeth Byrd got to rehearse with John at his home (surrounding by all of his EGOT awards) with him on piano. It was a sweet intro for what turned out to be a gorgeous performance. She gave a vocal-forward performance that allowed the gentle tone to take center stage, but more than that I think she worked an elaborate stage like a pro and completely made a contemporary pop song her own. Impressive!

8:18 p.m. – Kelly loved what Marybeth did this week and told her she has the ability to make the audience “hang on every word.” Gwen also thought that she made it her own and was “completely forward” by it. John confirmed that they planned the whole stage presence around building a story and that she executed perfectly.

8:26 p.m. – This week Blake and Kat Hammock chose “You’re Still the One” by Shania Twain for her because it’s an innocent love song that allows her to just show off her one of a kind voice. Sure enough Kat delivered a very tender and sweet rendition of the song while maintaining the country spirit of the song. At points her voice did seem a bit strained, but I think that’s just a continued struggle with getting her nerves under control.

8:45 p.m. – Last week America saved Shane Q so is goal this week with Billy Ocean‘s “Caribbean Queen” was to take a song his dad has always loved and make sure that he continues with the confidence that he showed in the instant save. It was definitely cool to see Shane take on something super uptempo and to get down with the vibe with a backing band on this performance.

8:57 p.m. – For Jake Hoot‘s performance of the Rhett Atkins uptempo track “That Ain’t My Truck”  he dedicated it to a loved one he lost in the war in Afghanistan and all service men and women. It was great to see Jake do something upbeat and to rock the stage because it kind of made him come alive. Gwen called him a true country star and Blake admitted that Kelly has done an “incredible job” coaching him.

9:08 p.m. – It was a shock to see Joana Martinez take on Christina Aguilera‘s mature “Impossible” this week, but that meant it was a chance for her to break away from her youth and also show how she can connect to deeper themes. Of all her performances this season I think this was her most grounded and her most vocally challenging, but whew she nailed it! This could definitely be the moment of her season and should snatch her a spot in the top 8.

9:20 p.m. – Continuing her thread of taking on some of music’s biggest voices, Katie Kadan (finally) chose an Adele song. Her performance of “Rolling in the Deep” tonight offered her the deep soul and theatrical opportunity that is so well suited for her voice. No one else in the competition could manage the huge chorus of the song and she made that very clear by handling it to perfection.

9:33 p.m. – Hello Sunday became the latest artists on the series to take on Demi Lovato‘s “Stone Cold,” a song way above their maturity level but because they have a personal connection to it it’s something they handled with such perfection that it made Kelly emotional during rehearsals. Ultimately it was important for them to prove that though they are kids they “go through things, too.” And honestly after some really fun performances, it was so important that they toned it all the way down for something this personal and intimate. And honestly they’ve never sounded better — I think this is their breakout moment and it could earn them enough good will to nab a spot in the finale!

9:44 p.m. – After a standout performance last week, Ricky Duran returned for Albert King‘s “Born Under a Bad Sign.” The song gave Ricky the chance to prove how good of a guitar player he is, further installing him as one of the most versatile artists of the season. Though his song this week didn’t reach the heights of last week’s it was still a great addition to his catalog on the show and made him seem like a bonafide rock start that could headline his own show.

9:55 p.m. – Capping off tonight’s show was Will Breman with Young the Giant‘s “My Body.” Once again Will gave a fully realized performance, making the most of a great stage set up and bringing his usual energetic and lively style to the plate. He’s the most natural and comfortable on stage of all the artists this season. When he went from edge of the stage to edge of the stage at the end cheering with the crowd it was a real moment that electrified the stage and the entire night.

10:00 p.m. – Who was your favorite performance of the night and which two do you think will be cut from the competition on tomorrow’s results show?