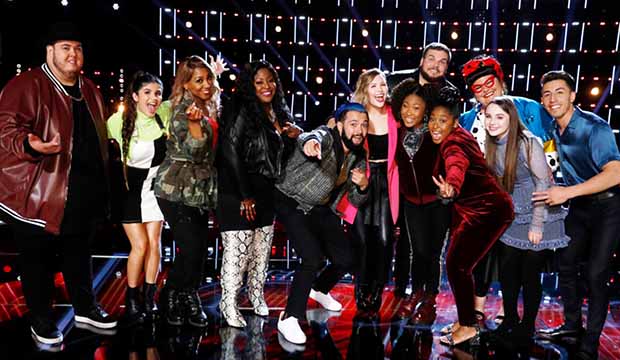 Fans of “The Voice” will choose the songs performed by the Top 11 artists on Monday’s episode. After tonight’s Live Playoffs, you can then vote for the contestants you want to move forward on Tuesday evening’s results show. Nine singers will be safe while two will face off for an Instant Save and a move into next week’s Top 10. Who will be the contenders that shine on Monday’s show and keep competing for the Season 17 championship?

We just published our power rankings over the weekend, listing our reasons for ranking best to worst for the Top 11. Do you agree or disagree with our choices? Here are the remaining contestants in our order for Season 17:

And now make your comments below and keep refreshing for our full live updating blog recap for Live Playoffs Top 11 performances night on Monday, November 25:

8:00 p.m. — The coaches have taken their seats and they’re ready to evaluate the Top 11. Voting is already open so let’s get started!

8:10 p.m. — First up is Team Legend’s powerful Chicago singer, Katie Kadan. Fans have chosen for Katie to sing Harry Nilsson‘s classic “Without You” which was also famously covered by pop legend Mariah Carey. Katie is situated center stage in a flowing gown when she begins the emotional ballad. She’s sticking with the original melody but her low, husky range adds it’s own dimension to the song. It feels more like a 80’s rock ballad. Overall, Katie delivered and I definitely think her fans will respond in big enough numbers to keep her safe. Katie received a standing ovation from the coaches before Kelly called her “mind-blowingly good” and John added she is “absolutely stunning.”

8:20 p.m. — Tonight’s second artist is Team Blake’s young indie pop star Kat Hammock. Fans have chosen for Kat to sing “I’ll Fly Away” by Gillian Welch & Alison Krauss. This bluegrass arrangement will certainly pull in some country fans without alienating those who appreciate her singer-songwriter pop vibe. While the performance is pretty simple it fits with Kat’s personality she’s pretty much pitch perfect. It seemed a bit juvenile compared to some of her other performances, but she still managed to get Blake and Gwen on their feet. Gwen says Kat is “unique and original,” while Blake adds “every week people are falling more and more in love with you.”

8:30 p.m. — We continue now with Team Kelly’s Sacramento soul singer Shane Q. Fans have chosen for Shane to sing “Mercy” by Shawn Mendes. Shane has performed this song at local coffee shops before he was on “The Voice” so he’s familiar with the track. He stands center stage and keeps the movement to a minimum which seems like a wise choice because vocally he sounds more focused than ever. I still find Shane hard to connect with and his lack of stage presence continues to be a burden. John feels like Shane was more confident tonight and delivered his best performance so far. Kelly says she’s hard on Shane because she can see the talent and fire inside of him and he brought it all out tonight.

8:40 p.m. — Up next is Team Gwen’s 16-year old pop singer who earned last week’s instant save, Joana Martinez. Fans have chosen for Joana to sing “Dreaming of You” by Selena and Gwen hopes going back to ballads will keep Joana safe this week. The stage looks like the set of a high school prom while Joana stands at the mic and delivers this sensitive ballad. It’s not the most captivating performance but I think it was a wise song choice that her fans will respond to. Blake says Joana is “coming into her moment” and Gwen adds that Joana was “flawless” tonight.

8:55 p.m. — Next up is Team Legend’s Will Breman who is singing “Light My Fire” by The Doors. This is actually the first time this song has been performed in the 17 seasons of “The Voice.” Will is playing guitar for this performance which seems to help his overall stage presence. It’s a cool, laid back arrangement that allows Will to add some jazz inflections before his vocals take a turn for a grittier, rock edge. Will has an excited demeanor on stage but his vocals seem to leave me wanting more. Blake calls the performance “weird and awesome” before John says Will is on an “advanced level as a vocalist and as a musician.”

9:05 p.m. — At the halfway point of tonight’s episode Team Gwen’s powerhouse Rose Short is taking the stage with her fan-chosen song “Maybe I’m Amazed” by Paul McCartney. Rose is injecting soul into this pop/rock ballad that puts her full range on display. I like that she’s not overdoing the verses and sticking with the melody before absolutely whaling on the chorus shaking the rafters. This is my favorite performance of the night so far and the coaches seem to agree because they were on their feet before the song was even half over. Kelly screamed “You betta saaang!” before Gwen gushed, “I have tears and I’m so moved by you…I feel like I’m on drugs.”

9:15 p.m. — Up next is Team Kelly’s teenage duo Hello Sunday. Fans have chosen for them to sing “The Middle” by Zedd, Maren Morris and Grey. They begin the song seated on stools and harmonizing before picking up the tempo and working the stage. While their voices sound great as usual, I’m not a fan of the arrangement of the song and it only slightly resembles the hit we’ve come to know. It wasn’t my favorite performance, but they’re not entirely to blame since the fans chose the song and their coach opted for an atrocious arrangement. Blake says he can’t brag on Hello Sunday enough because they’re so talented and focused. Kelly says she’s never seen anything like them and she’s so proud to have them on her team.

9:30 p.m. — Up next is Team Gwen’s passionate vocalist Myracle Holloway. Fans have chosen for Myracle to sing “Everybody Hurts” by R.E.M. Giving this soul singer an alternative rock ballad is an interesting twist that could work well for her. Myracle is standing center stage to deliver this vocal and she seems genuinely connected to the lyrics. Myracle has a great tone to her voice and just as I was hoping she would take this song to another level she hits the chorus she goes for it and throws in a little more power at the end. John is happy Myracle has gotten the opportunity to be on the show and touch so many peoples’ lives. Gwen compliments her for seizing the moment and delivering a flawless performance.

9:40 p.m. — Team Legend’s small town singer Marybeth Byrd is up next singing “Stars” by Grace Potter & the Nocturnals. This is a perfect song choice that fits right into Marybeth’s wheelhouse and she is delivering the vocals on stage accompanied by a lone piano player. She sounds great tonight and closely resembles the original recording of this song. While I’ve thought Marybeth has been forgettable at times throughout the season, this is definitely one of the stand out performances tonight. Kelly called it a “smart pick” and thinks Marybeth “soared.” John called the performance “powerful” and “one of her best performances so far.”

9:50 p.m. — Up next is Team Kelly’s country singer Jake Hoot. Fans have chosen for Jake to sing “Every Light in the House” by Trace Adkins. This mid-tempo country ballad is a sweet spot for Jake that always allows him to excel. He’s a consistent singer and this performance is sure to strike a cord with his fans. Jake’s voice never misses and I’m sure Blake is seething that Kelly snagged Jake while he is sitting with no country artist this season. Gwen called the performance “beautiful” and Kelly says he’s “so nostalgic and such a great storyteller.”

9:59 p.m. — Closing out tonight’s show is Team Blake’s Ricky Duran. Fans have chosen for Ricky to sing “Downtown Train” by Rod Stewart. This classic rock song is perfect for Ricky’s voice and he’s got that charisma that allows him to shine even when just standing still and playing guitar. The vocals are spot on and he remains true to the melody while putting his own stamp on it. Fans will respond to this and Ricky has nothing to worry about this week. He’ll sail into the Top 10. John says he forgets that Ricky is a contestant because he already carries himself like a professional artist. Blake says Ricky is having his moment right now and he deserves it. That wraps up tonight’s performances! The Top 10 will be revealed on Tuesday’s live results show.