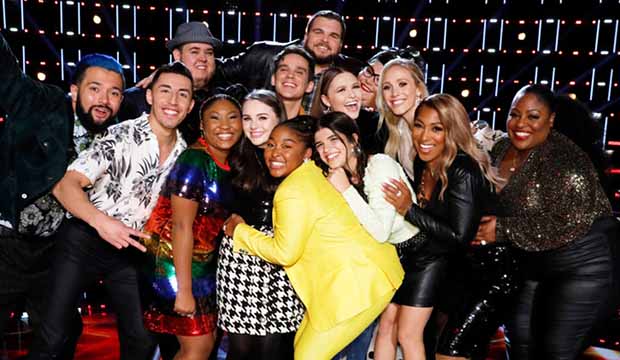 “The Voice” Top 13 take to the stage on Monday November 18 to sing for America’s votes. We asked viewers of “The Voice” to weigh in with their predictions as to which five of these artists will be eliminated. The results are clear with four contestants — Myracle Holloway, Joana Martinez, Shane Q and Cali Wilson  — each registering just 1% of the total tally as of this writing. A fifth contender for the season 17 title, Ricky Duran, eked out a mere 2%.

Each of the baker’s dozen of artists in the Top 13 will perform one song on Monday’s live show. The lucky seven singers who rack up the most votes overnight are guaranteed to move on in the competition. Conversely, the three with the fewest votes are instantly eliminated. And the three in the middle will sing again with viewers voting in the Instant Save for the one artist that will go through to the Top 8.

Ricky and Cali are on Team Blake Shelton. This country superstar won six of the first 16 seasons of the show. However, if both these artists are eliminated as we predict, Shelton’s roster will be reduced to just one (Kat Hammock) in the Top 8. Likewise for his lady love, Gwen Stefani, who is coaching both Myracle and Joana. She also will be left with just one artist, Rose Short, in the competition.

Kelly Clarkson won her first two seasons as a coach on “The Voice” and numbers four artists among the Top 13. One of these is Shane. Should he be ousted on Tuesday, she will be left with a trio — Max Boyle, Hello Sunday and Jake Hoot — still in the running.

Reigning champion coach John Legend has three artists in the Top 13: Will Breman, Marybeth Byrd, Katie Kadan. We predict they will all be among the Top 8, thus increasing his odds of a second consecutive win.

What do you think?  If you haven’t voted yet, weigh in with your pick as to which of these Top 13 artists will be crowned champion of “The Voice” on December 17. Cast your ballot in our poll at the bottom of this post. And be sure to sound off in the comments section about your favorites and those that you will be glad to see go.

Our predictions event for “The Voice” is now active. Be sure to also make your predictions for other reality programs such as “Survivor.” You can keep changing your picks until each episode begins. You’ll compete to win a spot on our leaderboard and eternal bragging rights. You can also predict nominations for the Emmys, Tonys and more. See our contest rules and sound off with other fans in our reality TV forum. Read more Gold Derby entertainment news.