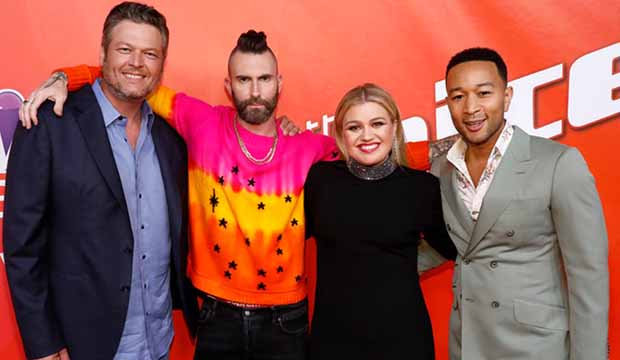 Another large number of artists will be eliminated Tuesday night on “The Voice.” Which five singers will be going home on this results show for Season 16? Six-time coaching winner Blake Shelton has an impressive six singers remaining. He is up against two-time reigning champ Kelly Clarkson (two contenders), three-time winner Adam Levine (two artists) and newcomer John Legend (three contestants).

But after the cuts tonight on the one-hour episode hosted by Carson Daly, there will be a Top 8 remaining to compete next week. Here’s how the voting process will work: the Top 13 performed Monday evening and then the public voted over the past day. the seven competitors with the greatest votes will be automatically voted into next week’s Top 8 show. Three will immediately be eliminated. Three will perform for an Instant Save on social media, with just one joining the Top 8.

This is a full list of contenders who are waiting for their results on Tuesday night and the songs they performed for “Fan Night” on Monday:

And now enjoy making your own comments below in our updating live blog recap for Tuesday, May 7:

9:00 p.m. – It’s time to find out which eight artists will go through to the semi-finals! The eighth semi-finalist will be determined by the Instant Save. Big congrats to Maelyn Jarmon, who was the most streamed artist on Apple Music, giving her a nice bump in the voting.

9:05 p.m. – The first two artists advancing to the Top 8 are Maelyn from Team Legend and Dexter Roberts from Team Blake! Eleven artists are still waiting to hear their fate.

9:10 p.m. – Singing a classic hit made famous by both Aretha Franklin and Dionne Warwick, “I Say a Little Prayer For You” is Team Legend. This is a talented crew, but Shawn Sounds was my favorite contributor to this collaboration. My second favorite part is John’s suit; he better WEAR THAT!

9:15 p.m. –  The next three artists advancing to the Top 8 are Gyth Rigdon from Team Blake, Rod Stokes from Team Kelly and Shawn from Team Legend!

9:25 p.m. – Special announcement from Carson: Next week’s episode will feature special duets and songs from The Beatles. Now back to more results. The next two artists advancing into the semi-finals are Carter Lloyd Horne from Team Blake and Andrew Sevener from Team Blake. Four of the six to advance so far are from Team Blake. The country fan base is STRONG.

9:35 p.m. – Team Blake is on a roll, so why not celebrate even more with a group performance of “Got My Mind Set on You” by George Harrison. This is actually pretty stale and Kim Cherry, who has the most energy AND busted out a saxophone, is the only one I find mildly entertaining right now. Overall, this was pretty underwhelming.

9:37 p.m. – Let’s get back to the business at hand and find out which three artists will perform for the Instant Save and which three will be eliminated. Competing for a place in the semi-finals are LB Crew from Team Adam, Mari from Team Adam and Kim from Team Blake. Oliv Blu (Team Blake), Jej Vinson (Team Kelly) and Cecilia Babini (Team Legend) were eliminated. Will Kim add to Team Blake’s stellar night and squash all of Team Adam in one blow? We’re about to find out!

9:50 p.m. – Kim is performing “My Lovin'” by En Vogue. We’ve seen enough of Kim singing these 90’s throwbacks and it’s been fun but I thought she’d show a little more versatility tonight. She’s entertaining, but I feel like she’s the most fun person at a karaoke bar, not someone who can win this competition. Next singing “Latch” by Disclosure featuring Sam Smith is Mari. I could barely hear her throughout the first verse, but her voice soon becomes more powerful. I’ve liked Mari more and more this week and think she has a genuine, unique voice. Last to perform is LB who is trying to save himself for the second time this season with “Better” by Khalid. There’s no question that LB is the best pure singer of these three, but he gets a little overly excited trying to pump up the crowd. Just sing LB. This is a mess. I’m not sure if he can’t hear or forgot some of the lyrics, but this was not a good song choice for him. Based on this I’d save Mari, but judging by how things are going tonight, Kim will probably advance.

9:59 p.m. The winner of the Instant Save and the final artist to move into the semi-finals is Kim Cherry, making it five for Team Blake, two for Team Legend and one for Team Kelly. It appears Kim earned about 39 percent of the vote with Mari capturing roughly 35 percent and LB with 26 percent. Team Adam has been completely wiped out and so has nearly all of the diversity this season. Shawn is the lone R&B singer and only person of color standing.

Make “The Voice” predictions for who will advance and who will be eliminated. Also, be sure to make your predictions to influence our reality TV racetrack odds for “Survivor,” “American Idol,” “RuPaul’s Drag Race” and more. You can keep changing your predictions until just each episode airs. You’ll compete to win a spot on our leaderboard and eternal bragging rights. See our contest rules and sound off with other fans in our reality TV forum. Read more Gold Derby entertainment news.