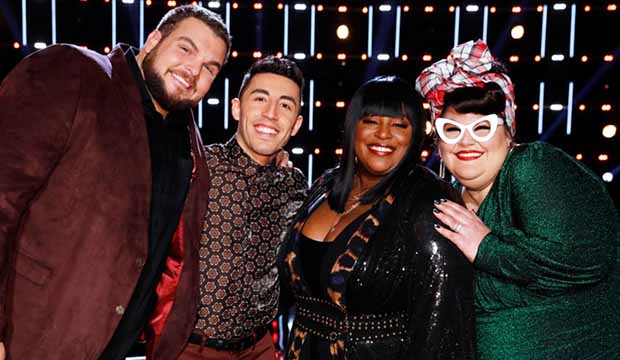 Now that we know the Top 4 for Season 17 of “The Voice,” how will this live finale work for the two-hour episode Monday on NBC? Each of these final four artists will perform three times on the show: one solo, one holiday duet with their coach and one original song.

Over the weekend, we provided you with our power rankings of these singers. Which one do you think will win the championship? Blake Shelton goes with genre-bending wild card Ricky Duran, Kelly Clarkson enters with the country artist of her dreams Jake Hoot, Gwen Stefani reaches the finals with soul music powerhouse Rose Short and returning champion John Legend goes for number two with theatrical jack of all trades Katie Kadan.

And now make your comments below and keep refreshing for our full live updating blog recap for the Top 4 performance show on Monday, December 16:

8:00 p.m. — The coaches are settling in for the live finale in Los Angeles. Tonight America will vote for their favorite artist to be crowned “The Voice” and for the first time in seven seasons each of the four coaches are represented. The four finalists will each sing three songs: A new cover, a brand new original original single and a special holiday duet with their coach. Let’s get started!

8:10 p.m. — First up is Ricky Duran, Team Blake’s four-chair turn rocker who is singing “Runnin’ Down a Dream” by Tom Petty. These classic rock songs have worked for Ricky so far and he’s sticking with the blueprint. He is keeping the original melody and isn’t pulling out too many tricks. Ricky looks like a star tonight sporting a glittered, black blazer and working the crowd like a pro while showing off more of his guitar skills. Overall this is a fun, energetic performance that should play pretty well to his fans. Kelly calls his range incredible, John thinks it’s cool to hear classic rock on this show and Blake says every time Ricky gets on the stage they know he’s going to do something awesome.

8:20 p.m. — Up next is the debut single Jake Hoot who co-wrote “Better Off Without You” about his divorce. He’s the only finalist who wrote his original song this season and Kelly is excited for people to see him as an artist, not just a great vocalist. For the performance, Jake is strumming along on his guitar as he coasts through the song, which doesn’t stretch his vocals much. It has a solidly catchy hook and it got the crowd screaming “Hoot! Hoot! Hoot!” so it seems like his fans are enjoying it. Gwen’s favorite thing about the performance is seeing Jake open up as a performer on stage. Kelly calls Jake a humble, awesome human and a great writer.

8:30 p.m. — Katie Kadan is the next artist to take the stage and she’ll be joined by her coach for a duet of “Merry Christmas Baby.” They’re giving this a sexy, bluesy spin before upping the tempo and jazzing things up with a full brass band behind them. This is a fun duet that even includes a little dancing between the two!  Well done.

8:40 p.m. — Rose Short is debuting her original single “Steamroller.” She connects to the song because she feels like she’s had to bulldoze her way through life. It’s a mid-tempo inspirational song and doesn’t allow her to show her range as much as we’re used to, but I love the low notes she’s able to hit. While some singers struggle with their lower registers, Rose is equally gifted going low as she is belting out the chorus at the top of her range. Blake says he hasn’t heard a better pairing of an original song and an artist on this show and Gwen complimented for being free on stage and thought it was fun watching Rose sing an original song.

8:50 p.m. — Ricky is being joined by his coach Blake for a rock and roll duet of “Run, Run Rudolph” by Chuck Berry. They begin the performance jamming on their guitars before launching into southern, country soul and getting the crowd on its feet. It’s a fun performance that should inspire some Blake fans to throw their votes in Ricky’s direction.

9:00 p.m. — Katie is the next artist to debut an original single. She is pouring her heart and soul into a song called “All Better.” She’s so great at putting passion into her performances so even listening to this unknown song feels familiar. It’s sort of a dark, bluesy song and she gives everything a bit of a funk vibe. Her over-the-top persona adds to her stage presence and this performance is fun to watch as Katie launches into some final wails of passion to end the song. I love that her dad is in the audience wearing a pair of bedazzled glasses to match his daughter. Kelly calls it a killer, sexy song and John thought it was a perfect pairing of Katie’s style with a modern production.

9:10 p.m. — It’s time for Jake and Kelly to team up for “Winter Song” by Sarah McLachlan. This is a beautiful ballad and a brilliant song choice that will probably top the duets for the night on the charts. Kelly and Jake’s voices blend wonderfully. We get to hear more of Jake’s range as they belt out the chorus. It’s hard to believe Jake was only a one-chair turn during the blind auditions and now he could be poised to win “The Voice.”

9:15 p.m. — Now Gwen is teaming up with Rose for a duet of Gwen’s own original Christmas song, “My Gift is You.” They’re performing on a set that looks like a throwback to “American Bandstand” and both are glammed up while a team of dancers performs around them. While this isn’t a vocally taxing song, Rose squeezes in some of her humor and divatude by letting Gwen know, “You may not need no money, but I do!” Their appreciation for each other truly shows on “The Gwen and Rose Show.”

9:25 p.m. — For Jake’s final performance he’s singing a cover of Lonestar‘s classic hit “Amazed.” It’s a wise choice to pull in votes because this country ballad will show off his voice and pull at the heartstrings of viewers at home. As expected, Jake’s vocals spot on and he’s really nailing this last appeal to fans. Gwen calls it a beautiful performance of a pretty song and Kelly screams, “I love you, Jake Hoot!”

9:35 p.m. — Katie is closing out her night with a cover of Aerosmith‘s power ballad “I Don’t Want to Miss a Thing.” She sounds gorgeous delicately caressing the notes of the first verse before launching into the bombastic chorus. Midway through the song a choir joins her on stage to up the dramatics and Katie is in the zone! That was spine-tingling. Blake calls this performance “unbelievable” and John is honored he was able to work with her and says she dazzles every time she takes the stage.

9:50 p.m. — For his last performance, Ricky is debuting his new original single “A Woman Like Her.” Ricky has consistently performed songs from decades ago so it’s nice to get an idea of what type of artist Ricky wants to be in today’s music landscape. This is a romantic ballad that has a flare of country feel to it, but Ricky’s natural rock flare makes this single feel the most radio-friendly of all the original songs tonight. Kelly says Ricky reminds her of Bruce Springsteen and this was a beautiful song. John was jealous he wasn’t pitched that song himself and Blake called it Ricky’s best performance of the season.

9:59 p.m. — Rose is closing out this final episode of competition with a cover of Elton John‘s “Border Song.” She has given this a full gospel makeover and she’s joined by a choir dressed in white behind her. I love seeing Rose be able to throw down like this for her final performance and she’s serving up the Holy Spirit in grand fashion. Powerful. John called it a beautiful message for the final song of the night and Gwen says Rose has known what to do at every turn of this competition and calls her a magical human being. That’s a wrap for the competition and now it’s time for America to choose a winner to be announced on Tuesday, December 17.