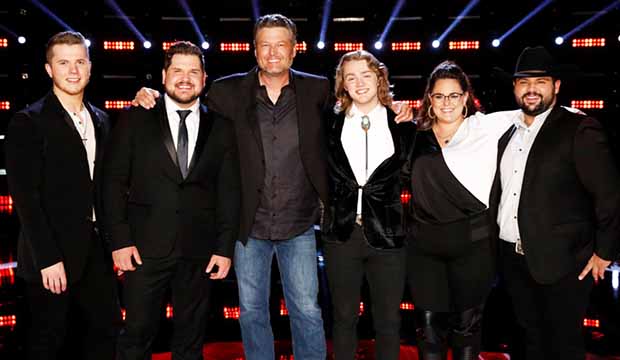 The Top 8 artists for Season 16 of “The Voice” will compete in the Semifinals for America’s votes on Monday, May 13. On this week’s results show, three-time champion Adam Levine lost his two remaining artists, leaving his team without a potential finalist for the third straight season. Two-time reigning champion Kelly Clarkson has one artist still in the running, while newcomer John Legend has two and six-time champion Blake Shelton has a whopping five.

For Blake that means at least one of his artists will not make the Season 16 Finals, but it also means he could have all four finalist spots from his team (would be a series first). Which of his artists is most likely to get the chop? Will it be Kim Cherry, the rapper-singer from Florida who bested two Team Adam artists in last week’s Instant Save? Or can she knock off one of her own team’s four young male artists who all appeal to a similar group of voters?

We’ll know better who stands a chance when on Monday night all eight artists perform for the overnight vote. Then, on Tuesday, May 14, the three artists with the most votes will automatically advance to the Finals. The two artists with the fewest votes will instantly be eliminated, leaving three in the middle to sing again and compete for the Instant Save. In our power rankings below, we make an attempt to predict who is safe, who is in danger and who could win the Instant Save. It’s our Top 8 artist rankings, from best to worst, at this penultimate stage of the competition.

1. Maelyn Jarmon (Team Legend)
At this stage in the competition last year, Chris Koeze was the only artist to receive the Apple Music vote multiplier as the most streamed performer, but still wasn’t crowned the winner. So far Maelyn has proved herself as the streaming favorite, earning the multiplier with her shattering performance of “The Scientist.” Whether that contributes to an overall win for her remains to be seen, but it should at least ensure her a comfortable spot among the finalists. It doesn’t hurt that she’s only one of two females still in the competition either and by far one of the most powerful vocalists. And honestly, we don’t really want an all-Blake final, do we?

2. Gyth Rigdon (Team Blake)
Surprisingly, Gyth was given the unfortunate spot of opening last week’s show despite being seen by many as a frontrunner to win. As the opener it’s always hard to remain at the top of viewers’ minds when it comes time to vote at the end of the 2-hour show, but Gyth managed to rank among the night’s top vote-getters regardless. I wasn’t that happy with the fan-determined song selection for him last week, so hopefully with the choice in his own hands this week he’ll be able to find something better suited to him and more worthy of a standout performance that he’ll need if he wants to beat Maelyn.

3. Carter Lloyd Horne (Team Blake)
Carter is my dark horse pick for the win after what I thought was an incredible performance of “Let It Go” last week. I really dig the singer-songwriter vibe for him and it’s something that differentiates him from the sameness of the rest of the Team Blake males. The key to his success this week is in song selection and with only this performance left before the finale he needs to make a big impact in order to announce himself as a true contender.

4. Rod Stokes (Team Kelly)
Kelly’s only hope at the threepeat (a feat only Blake has achieved through seasons 2, 3 and 4) now rests in Rod’s hands. And, well, while the odds are stacked against Kelly, Rod is at least a very strong singer and overall performer. His “When Man Loves a Woman” rendition was a showstopper and could be enough to propel him into the top three spots this week, even if he gives a mediocre follow-up. In the event that he doesn’t make it through straight away, I think he will certainly make the middle group and sing for the Instant Save. If/when he sings for the Save, the massive influence of being Kelly’s only artist is going to work in his favor, especially if Team Blake is already showing signs of overperformance in the results.

5. Shawn Sounds (Team Legend)
At this point there is no one else in the competition like Shawn, who has carved out his own emotionally-driven niche this season. “A House Is Not a Home” was a great song choice that the fans gifted him because big standards like that are exactly what he should be singing. I worry for him in the event that he has to sing for the Save because he’ll be up against some strong contenders from Team Blake and likely Rod. With Maelyn already representing Team Legend, there might not be as big of a swell of support in his favor.

6. Dexter Roberts (Team Blake)
It’s true that I’m probably underestimating the built-in support that Dexter has coming from his prior appearance on “American Idol,” but it’s also true that he’s one of the least interesting performers of Team Blake. In the event (unlikely event, I hope) that Blake scores all three top spots from his team, I think Dexter could be that third finalist, but I’m still banking on the idea that viewers will want to diversify the finalists. In that regard I think Dexter is at a disadvantage in the Instant Save run-off.

7. Andrew Sevener (Team Blake)
On any other season and perhaps on any other team Andrew might have stood a chance at making the Finals. Unfortunately he’s bundled in on a Team Blake that because of the odd structure of this season (ugh, those Cross Battles!) is just way too bloated. With half of the artists getting eliminated this week it’s just too big of a cut for Andrew to advance over the likes of his teammates who have had stronger performances and personalities throughout the season. That being said, he was among the tops with the public last week so maybe I’m wildly underestimating his appeal?

8. Kim Cherry (Team Blake)
Clearly the most unique artist remaining in the competition and a viable contender to repeat as the Instant Save winner, Kim has to be ranked at the bottom here simply because she polled the lowest among votes last week despite a very strong performance of “Whatta Man.” Granted, she had the handicap of performing early in the night so maybe her low votes were a fluke and her dominance in the Instant Save voting is more indicative of how much overall support she has? Still, I’m not expecting her to deliver a “wow” performance and frankly she’ll need that if she hopes to make the Finals.

Make your “The Voice” predictions now for the Top 8. Also, be sure to make your predictions to influence our reality TV racetrack odds for “Survivor,” “American Idol,” “RuPaul’s Drag Race” and more. You can keep changing your predictions until just each episode airs. You’ll compete to win a spot on our leaderboard and eternal bragging rights. See our contest rules and sound off with other fans in our reality TV forum. Read more Gold Derby entertainment news.