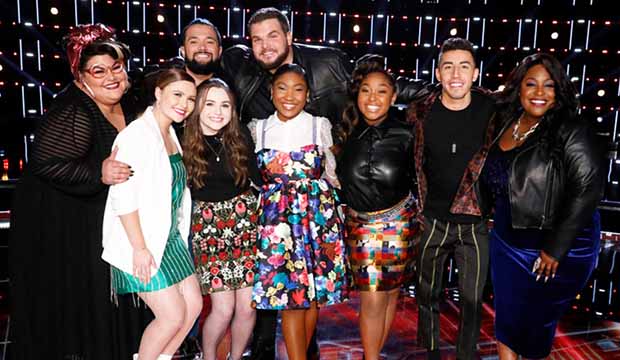 Coaches Gwen Stefani and Kelly Clarkson each lost another artist as Tuesday’s results episode of “The Voice” revealed the eight semi-finalists. Gwen’s Joana Martinez and Kelly’s Shane Q were defeated by Team John Legend‘s Marybeth Byrd after all three sang for the instant save. Heading into the Top 8, Team Legend remains intact with three artists in contention while Blake Shelton and Kelly each have two. Gwen has just one hopeful remaining.

After the eight semi-finalists perform again Monday, December 9, the public will vote. The three artists with the most support will advance to the finale. The two artists with the least amount of votes will be instantly eliminated and the three remaining will sing for the final instant save of the season. The winner of that instant save will advance to the Top 4 and have a shot at the Season 17 title.

Below we rank the top eight from best to worst, pinpointing which three we think will advance on the public vote, the three we imagine will compete for the instant save and the two that will be instantly eliminated. And here is our full live blog for this past Monday’s Top 10 performance show.

Jake has an incredible advantage as the only country artist in the competition. His consistent vocals and the fact that he’s been the most streamed artist week after week further solidify him as the singer to beat. While huge vocal ranges and big personalities are often memorable to viewers at home, they don’t always secure a win. This wouldn’t be the first time a good ol’ country boy took down more vocally dynamic competitors.

There’s simply no question that Katie is headed to the finale. She’s been a front-runner all season and for good reason. Her larger-than-life persona matches her husky, rich vocals and she never breaks character. Unlike many of her competitors, Katie has delivered multiple standout performances this season and she should be considered a major threat to win the title.

Ricky has the entire package encompassing what it takes to be a star and continues to get better each week. His charisma on stage was further solidified during his Top 10 performance when he showed off incredible musicianship with his guitar solo. Ricky could benefit from singing a more contemporary song that shows how he will fit into today’s musical landscape, but regardless of what he sings next he seems poised to reach the finale.

Rose has absolutely slayed the competition when it comes to vocal prowess and her confidence continues to grow each week. Her song choices have been diverse, yet she always puts her own spin on them so it never feels like she’s out of place. Rose absolutely deserves a spot in the finale, but the road could get complicated if she has to fight for the instant save. If another soulful/R&B act is among the three vying for that save, Rose could have some of her votes split and lose her spot to someone from a different genre.

Hello Sunday knows how to make the audience smile and they can also sing their 14-year old hearts out! Each week they mature before our eyes and certainly have a bright future ahead of them. While winning this season seems like a stretch for this duo, the finale could be in reach if they really nail their next performance.

Kat has one of the most easily recognizable and unique voices this season. Unfortunately, she doesn’t seem to be progressing at a rate most of her competitors are. While I once considered her a potential threat to win, I now think Kat is on the chopping block and could fall short of the finale. But she still has a shot! Let’s say, for instance, she’s battling for the instant save against Rose and Hello Sunday. If they split the vote among fans of the soul/R&B genre, Kat is in! Advancing by popular vote alone seems unlikely.

Will gave one of the standout performances during the Top 10 week, but he’s generally been hit or miss. He’s vocally inconsistent and because he’s never proven to be one of the stronger artists on the charts, I’m not sure how strong his fan base is. The odds of Will reaching the finale seem stacked against him.

Marybeth has been pretty consistent this season and John has been wise with her song choices. After falling into the middle of the pack week after week, Marybeth found herself at the bottom and had to win the instant save to reach the Top 8. No artist has ever reached the finale after advancing to the semi-finals with an instant save so the odds aren’t looking good for Marybeth.