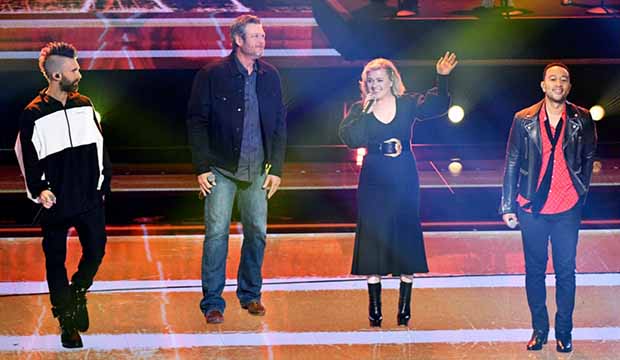 After the Top 8 artists performed on Monday’s episode of “The Voice,” they now await their fate on Tuesday’s results show. Four will move on to next week’s finale for Season 16. Four talented singers will unfortunately be eliminated.

For this Top 8, Blake Shelton has an astonishing five of them. It’s possible only one team member goes home and the other four make up the Top 4 finale. More likely, however, is that Kelly Clarkson and/or John Legend will have someone also in the finale. Coach Adam Levine is done for this season.

For tonight’s one-hour episode hosted by Carson Daly, here’s how the competition will work:

Three contenders will automatically advance forward through public voting. Two will immediately be eliminated on this show. Three will perform for an Instant Save on social media, with just one joining the Top 4 finale next week.

This is a full list of the Top 8 contenders who performed on Monday:

And they also teamed up for duets of hit tunes by The Beatles:

And now enjoy making your own comments below in our updating live blog recap for Tuesday, May 14:

9:00 p.m. – The show opened with the man of the season, Blake, performing his song “God’s Country.” The track is darker than the casual fan would be familiar with when it comes to his music, and I’d guess that rock-soul-country crossing over that is common among the contestants on the show may have had some influence on it.

9:05 p.m. – Before getting to the first set of results Carson congratulated Team Legend’s Maelyn as the most streamed artist on Apple Music during the overnight voting period. As such, it was no surprise that the first artist declared safe and moving on to the finale was her!

9:10 p.m. – The second artist that earned enough votes to be named a finalist was Dexter from Team Blake!

9:18 p.m. – For their first performance together, Kelly took the stage with Rod for the Bob Seger and Martina McBride duet “Chances Are.” Like his duet with Maelyn last night, Rod reinforced how great of a pair he is in a male-female duet. Hey, it isn’t easy to sing alongside Kelly, one of the greatest voices of all time, but Rod held his own and sounded great!

9:22 p.m. – The third artist to advance to next week’s finale was Gyth, also from Team Blake! That leaves five artists awaiting their fate, three of which will sing for the Instant Save and two of which will be eliminated outright.

9:28 p.m. – A representative of Team Blake from season 9, Emily Ann Roberts returned to “The Voice” stage to debut her new single “Someday Dream.” It was a very cute performance, mixing well her traditional country sounding voice with a more contemporary arrangement.

9:32 p.m. – With the five remaining artists on stage, Carson named the three that polled in the middle of the pack and would sing for the Instant Save: Shawn, Rod and Andrew! That means Carter and Kim both received the lowest amount of support overnight and were eliminated.

9:40 p.m. – Andrew performed first with “Simple Man” by Lynyrd Skynyrd. With his guitar and the mic only, it was the perfect vibe and song selection for the Save. He presented grit and a textured rock vocal that actually would have made for a great Monday night performance!

9:43 p.m. – Second to sing was Rod with “Brother” by NEEDTOBREATHE. The inspirational track was also a smart choice because it easily draws people in because of it’s subject matter of supporting one another. It certainly wasn’t Rod’s best performance of the competition, but he had a really nice moment at the end when the music dropped and he sang a cappella briefly.

9:47 p.m. – And last to sing was Shawn with the Bruno Mars song “That’s What I Like.” The uptempo song was a departure from what we’re used to from Shawn, but it was nice to see him show another side of himself as an artist. But he definitely looked the part in his outfit and worked the stage from side to side with tons of confidence.

9:51 p.m. – When the cut to commercial break began we saw a glimpse of how the live Twitter votes were shaping up: Andrew was in an early lead with 40% of the vote with Shawn and Rod trailing at 30% each. As the break continued, Andrew increased his lead by a few points.

9:55 p.m. – After a round of thanks to their coaches the guys found out the results. The fourth and final artist to enter next weeks’ finale was Andrew! That’s three finalists for Blake and one for John and ends Kelly’s hopes at the threepeat.

SEE ‘The Voice’ Top 8 Instant Save: Was right artist rescued by viewers of season 16? [POLL]

Make “The Voice” predictions for who will advance and who will be eliminated. Also, be sure to make your predictions to influence our reality TV racetrack odds for “Survivor,” “American Idol,” “RuPaul’s Drag Race” and more. You can keep changing your predictions until just each episode airs. You’ll compete to win a spot on our leaderboard and eternal bragging rights. See our contest rules and sound off with other fans in our reality TV forum. Read more Gold Derby entertainment news.