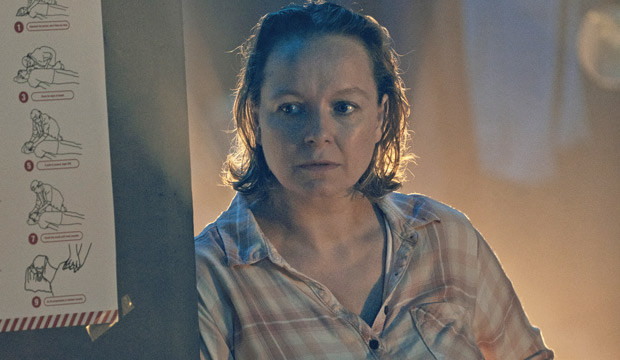 After a high energy mid-season premiere, AMC’s “The Walking Dead” slows down in Episode 10 so the audience can get to know important new characters. Samantha Morton’s Alpha was only teased last week, but here we see her full evolution into the savage she has become. Though an unreliable narrator sparks questions over what details should be believed about the mysterious new group hunting the residents of Hilltop. These are the five most memorable moments from “Omega.”

“The Walking Dead” rarely uses flashbacks, but large chunks of this episode play out in the past, as Lydia (Cassady McClincy) clues in Henry (Matt Lintz) on her life in the early days of the apocalypse. She paints a picture of her distant father who kept a “cold look” in his eyes, and her protective mother who had trouble standing up to him. All signaling domestic abuse. Hiding out in a basement with other survivors, the father picks up a pair of scissors in a threatening manner. “World’s over, I’m doing what I want now” he says, before trimming his long beard that his wife forced him to keep. Samantha Morton plays meek and humble in the flashback before asserting herself to protect Lydia. It alludes to a battered-housewife-turned-warrior evolution similar to Carol (Melissa McBride). Henry even remarks that their mothers are similar: “you don’t mess with her either.” If the series is hinting at an eventual McBride vs. Morton showdown, I’m here for it.

Daryl (Norman Reedus) yanks Henry out of the cell after the boy offers up too much information on his family and The Kingdom. Soon Daryl takes over the interrogation, asking if Lydia’s mother would kill his captive friends. Lydia thinks back on a moment in the basement where her mother crushed the neck of a hysterical man for being too loud. It looks accidental, but from Lydia’s perspective it’s hard to tell. Daryl spots bruises on her arm and questions how she got them if her Dad (the supposed abuser) has been long dead. “When you stay soft, people die” replies Lydia. In another flashback, her father pushes young Lydia out of the way as the man her mother killed reanimates. The fresh zombie sinks its teeth into Dad’s neck. But in other flashbacks, we see the father being stabbed. Lydia also has flashes of her mother with a bald head. How accurate are Lydia’s memories?

Yumiko (Eleanor Matsuura) argues for the continued search of Luke (Dan Fogler) despite Tara’s (Alanna Masterson) orders to stay put. Her compatriots agree and sneak out of Hilltop in the night. Stumbling through the foreign territory in the dark, Kelly (Angel Theory) is almost bitten by a walker. Realizing her plan is putting her friends in danger, Yumiko orders everyone back to Hilltop. But Kelly breaks down crying, unable to leave Luke out in the wilderness alone. Connie (Lauren Ridloff) agrees to stay with her sister and continue the search while the others head home. A figure spies on Connie and Kelly from afar.

Determined to continue his series of boneheaded moves, Henry lets Lydia out of her jail cell for a midnight stroll. His theory about her “good heart” is confirmed to him when she shares a meal of yummy worms with him as they hide from guards. #romantic? Never mind that she’s totally ready to bash his skull in with a hammer, and only stops when she hears the cries of a baby. This makes Lydia stop and take in the impressive infrastructure of Hilltop, a type of community her mother said couldn’t exist anymore. She has a bit of sensory overload and something snaps in her mind.

We dive back into her memories, but this time it’s her father who is the nurturing one. It’s her mother who grabs the scissors and chops off her hair, who snaps the man’s neck maliciously, who has the “cold look’ in her eyes. And when Lydia’s dad tries to protect her, her mother plunges those scissors into his abdomen, stabbing him to death just to be rid of him. Lydia has spent the ensuing decade with a false narrative her mother spun, desperately telling herself that this woman who abused her was a good person and only wanted her daughter to be strong. Afraid and confused, she tells Henry to put her back in the cell.

Yumiko apologizes to Tara for sneaking out, but Tara says she understands the desire to protect those you love. From the walls, they see Kelly and Connie being escorted home by Hilltop guards. Tara sent them out immediately after Yumiko and company left. But Yumiko’s smile at seeing them quickly turns to horror as a group of Whisperers emerge from the woods, storming towards the gate. The guards grab Kelly and whisk her inside. Connie, who is lagging inexplicably far behind the group, ducks into a cornfield to avoid being spotted. The masked menaces stand eerily still outside the walls as a bald figure moves between them. Lydia’s mother emerges, eyes wild and lips snarled. “I am Alpha” she shouts in a southern drawl, “We only want one thing from you. My daughter.” Cue chills. 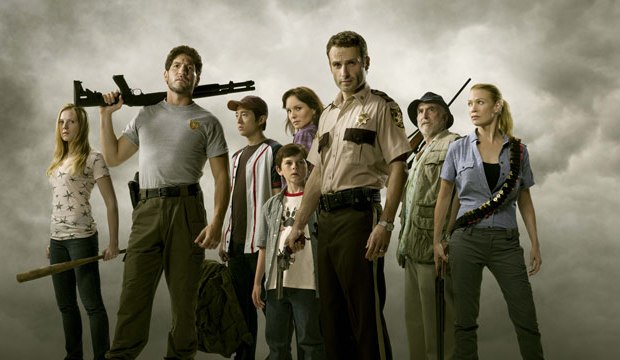 'The Walking Dead' preview: Top 5 events to remember before Season 10 returns this Sunday