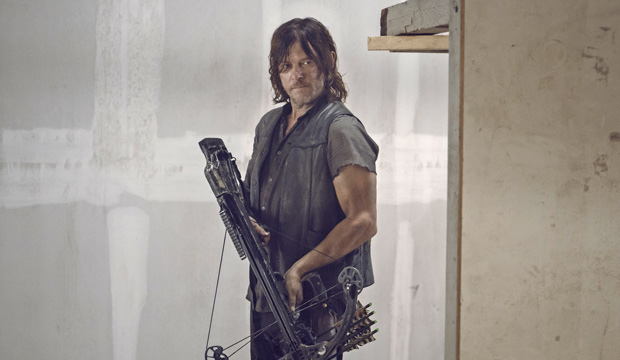 The fair is almost here. Season 9 of “The Walking Dead” is galloping towards this moment, where in theory, all four united communities will gather together for the first time in years. Homemade banners (reminiscent of house banners from “Game of Thrones”) for each community are even unfurled in The Kingdom in celebration. But the road to this festive occasion proves fraught. Some survivors are pursued by Whisperers, while others encounter a strange new group. Check out the five most memorable moments of “Chokepoint.”

SEEEmmy spotlight: Can Samantha Morton become the first actor to snag a nomination for ‘The Walking Dead’?

The Whisperers rebuild their camp after being overrun by their own zombie “guardians.” Beta (Ryan Hurst) tends to a man suffering from a nasty bite on his neck. If this was any other group, there would be a mercy killing. But this man accepts that he will become “one of them” as if he’s going off to Valhalla. Beta orders an underling to fetch the man’s wife to inform her that “the change” is coming to him. Not only is Beta terrifying because of his immense size, but because of his willingness to accept the cult-like mindset that governs The Whisperers. Lydia (Cassady McClincy) later remarks that Alpha won’t send an army to fetch her because all that’s needed is Beta. The prospect of being stalked by this sole madman is much actually much scarier than facing an entire zombie horde.

Connie (Lauren Ridloff) directs the band of fugitives to a tall apartment building under construction. She notes to Daryl (Norman Reedus) that they can use the higher ground as a chokepoint to control the situation with The Whisperers. Daryl quickly learns that Connie has been to the location before (she has a hidden cache of water and first aid supplies in the floor) and that she wants to leave Lydia behind when the fight is over. That certainly doesn’t sit well with Henry (Matt Lintz), who continues to put everyone in danger after falling in love with the weird zombie girl in just a couple days. Even Lydia thinks Henry was stupid for trying to rescue her. But Henry reasserts his care for Lydia and even wants to run away with her. This misguided impulse apparently makes Lydia swoon and earns Henry his first kiss. Perhaps if the pair does run away from home they can stop endangering everyone around them.

Over at The Kingdom, Jerry (Cooper Andrews) and Diane (Kelly Cahill) report that they were ambushed by a group of men who took their weapons. The men left a letter (marked with the same red symbol that the crew passed on their movie theater mission) announcing themselves as The Highwaymen. The mysterious group demands a toll from The Kingdom or else any travelers on “their highways” will be blocked from accessing the fair. Ezekiel (Khary Payton) rounds up his fighters and stakes out the group’s camp, only to find it heavily armed. Carol (Melissa McBride) notes that they never threatened harm and advocates for diplomacy. So the King offers the Highwaymen a job: keep the roads safe in exchange for access to The Kingdom. The leader of the group laughs at Ezekiel’s offer, but Carol salvages the situation of course. “When’s the last time any of you have seen a movie?” she asks as the man’s eyes light up.

Tara (Alanna Masterson) guides the Hilltop delegation to the fair, but their wagon is blocked by a fallen tree. Tammy Rose (Brett Butler) and Earl (John Finn) are enjoying looking after the abandoned Whisperer baby and stay back in the wagon as others remove the tree. As is won’t to happen whenever someone is stopped on a road in “The Walking Dead,” walkers soon emerge from the woods and descend on the group. A brutal fight breaks out with several close calls, including one of the obnoxious teens who got Henry drunk (alas, he is saved by Obnoxious Teen #2). Earl is knocked over by a walker and struggles with it on the ground. Tammy Rose secures her baby in an old chest on the wagon and launches herself at the zombie. She lands a headshot with a spear and saves her husband. Who knew Hilltop’s resident gardner was such a badass. Eventually the Highwaymen ride up and slaughter the rest of the advancing zombies. Apparently they liked Carol’s movie idea and took the job offer.

Battle for the Girl

The Whisperers eventually make their way into the apartment building to collect Lydia, following the path of blockades that Daryl has laid out. Henry takes down the first attacker, but per his promise to Lydia doesn’t kill him. This obviously becomes a problem. Connie saves him from another attacker, but finds herself dodged knife blows from another Whisperer. Without Connie’s sharpshooting, Henry is again overtaken as the Whisperer he failed to kill stabs him in the leg with a spear. Luckily for him, Daryl’s dog shows up to rip out the assailant’s throat.

The big showdown is Daryl vs. Beta. Beta busts through a wall like X-Men’s Juggernaut and begins tossing Daryl around the room. Daryl is able to stab the brute in the chest with a small knife, but it barely slows him down. After an epic brawl, Daryl realizes he can’t win a head-on fight. He scurries away and hides in Connie’s secret space under the floor. Once Beta passes by, Daryl silently creeps out and charges at the villain, knocking him down the nearby elevator shaft. The group reconvenes and plans to head to nearby Alexandria to heal, but the camera pans down the elevator shaft. Beta has survived his fall and is none too happy about being bested.