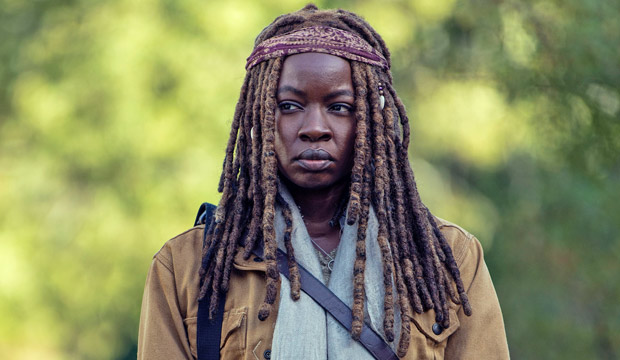 Season 9 of “The Walking Dead” dangled plenty of unanswered questions after the six-year time jump. And in Episode 14, “Scars,” the horrifying truth to Alexandria’s isolationist policies are finally unearthed. The flashback heavy hour mostly follows Michonne (Danai Gurira) as she suffers through an emotional gauntlet in past and present. After the explosion at the bridge, we see Michonne search for any sign of Rick’s body, only finding his abandoned Colt Python revolver. It’s here when she admits that she can no longer stomach being alone, but the events of the episode will teach her to shut out those around her. Here are the five most memorable moments from “Scars.”

Daryl (Norman Reedus) arrives at Alexandria’s gate after the battle with the Whisperers. Michonne is hesitant to let the group in due to Lydia’s (Cassady McClincy) presence, but she trusts Daryl and Henry (Matt Lintz) needs medical attention. But the moment brings up a past memory for Michonne, when Scott brought a group of lost children to the gate. They are lead by Jocelyn (Rutina Wesley), who turns out to be an old college buddy of Michonne’s, before the world ended. The group is given a home in Alexandria, and everyone appreciates having more children and laughter in their midst. Michonne, pregnant with RJ at this stage, is happy to have her friend back. But something about the situation appears too good to be true.

SEE ‘The Walking Dead’ Deaths: 26 Most Shocking of All Time

Troubled by her memories, Michonne goes to Judith’s (Cailey Fleming) room for a heart to heart, but her daughter is gone. In a panic, she hustles to Negan’s (Jeffrey Dean Morgan) cell to demand answers. He is adamant that she hasn’t stopped by today, but isn’t surprised Judith left. “She hates that you aren’t letting people in” Negan tells Michonne, and wishes the world were more inclusive like the one described in Carl’s goodbye letter. And after learning from Daryl that Hilltop has been threatened, Negan suggests that perhaps Judith will behave like her mother and take action into her own hands. Sure enough, Michonne discovers a note in Judith’s room saying she is off to help their friends in need.

Turns out this isn’t the first time Michonne has lost Judith. In a flashback, Michonne and other parents head to Jocelyn’s to pick up their kids from a sleepover. But no one is home. They frantically look for the children but discover a dead guard, raided infirmary, and bloody footprints leading to the sewer. Michonne is a guilt ridden mess at letting her guard down around her old friend, so Daryl helps her search for the Alexandrian children. “Some people have so much evil in their hearts,” he says of Jocelyn, “they hide it like they’re wearing a mask.” Foreshadowing The Whisperers much? In any case, they discover Jocelyn’s base of operations at a school but are knocked out and tied up by her army of warrior children. Jocelyn has a twisted take on “children are our future” and is training them to be ruthless killers. She orders two children to “mark” Michonne and Daryl, and both are seared with a molten hot “x” brand. Now we know where the mysterious scars came from.

Daryl eventually frees himself and Michonne, but they are confronted by some evil children in the hall. Daryl is shot and Michonne uses a piece of metal pipe to fend off the others. She incapacitates the kids, but not before a young boy slices her pregnant stomach with a knife. She rushes outside as the rest of the child army is ushering Judith and the Alexandrians into a trailer. Jocelyn ambushes Michonne, bashing her repeatedly with a wooden beam. But Michonne gains the upper hand at the last second and drives her katana through her former friend’s chest. An older teen orders a young boy to kill the Alexandrian children as the others rush Michonne. She begs them to stop attacking, attempting to knock them away without hurting anyone. But the boy marches towards the trailer, knife in hand, and her pleas fall on deaf ears. With tears streaming down her face, she has no choice but to slaughter the attacking child army. Judith and the rest are saved, but Michonne is broken.

Michonne catches up to Judith in present day and saves her from a zombie’s clutches. As she patches up her daughter, she recounts the story of what she had to do to save her from Jocelyn’s group. How those actions made her close Alexandria’s borders permanently. To Michonne’s surprise, Judith remembers the ordeal. But Young Ms. Grimes points out that helping friends in need at Hilltop and The Kingdom is not the same as letting in a stranger. “Loving someone means doing whatever it takes to keep them safe” she tells her Mom, and asks why they’ve stopped loving their friends. Realizing that Rick and Carl didn’t give their lives to keep everyone separate, Michonne agrees with Judith and they ride out to the fair. They even grab Daryl and his companions along the way. Little do they know that a pair of Whisperers are closely watching the arrivals at The Kingdom. “We must tell Alpha” one says with an evil smirk. Perhaps Michonne’s closed-borders instincts were smart after all.