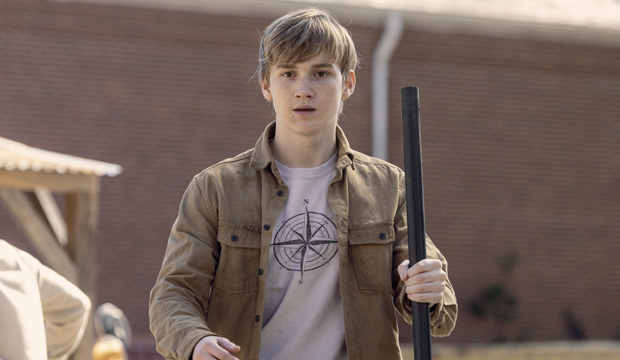 “Happy Anniversary” says new Hilltop member Hilde to her husband Miles. The penultimate episode of “The Walking Dead” Season 9 leads viewers to believe that this happy couple will become series mainstays. But as we chart their relationship through years of anniversaries, their stay on the show is cut short. On the way to the fair, their cart winds up overturned, Hilde’s cache of cute Hilltop pendants strewn across the forest floor. The couple is dead, murdered by Alpha (Samantha Morton). This brutal episode expands upon this opening montage, as joyous characters are destroyed by the end credits. These are the five most shocking moments from “The Calm Before.”

Everyone unites at the fair. Ezekiel (Khary Payton) gives a rousing speech about joining to celebrate their accomplishments and friendships. Not everyone is in a celebratory mood however, particularly Tara (Alanna Masterson). She’s angry Lydia (Cassady McClincy) was granted asylum by Alexandria. “If her mother retaliates, it will be against Hilltop, not Alexandria” she argues. Michonne (Danai Gurira) points out that Lydia chose to abandon her mother, and Tara herself was once deemed untrustworthy after her stint on the Governor’s firing squad. Tara relents when the groups offer soldiers to protect Hilltop, and Michonne proposes a “mutual protection pact.” Ezekiel surprises her by producing Michonne’s long abandoned charter. All four communities sign the charter, united for the first time since Rick’s disappearance.

The fair is a joyous occasion and it’s difficult to recall a moment when any of these characters have seemed this relaxed and happy. Ezekiel and Carol (Melissa McBride) beam with pride at seeing Henry (Matt Lintz) again, and are stunned that he gets to take a date to a movies like a normal teen. Enid (Katelyn Nacon) calls Alden (Callan McAullife) her boyfriend for the first time, and even convinces him to sing with Luke (Dan Fogler) that evening. Tammy Rose (Brett Butler) shows off her baby. Addy (Kelley Mack) apologizes for ratting on Henry, but don’t worry, her cohorts Gage (Jackson Pace) and Rodney (Joe Ando Hurst) are still total tools. Rosita (Christian Serratos) has a touching moment with Eugene (Josh McDermitt), thanking him for helping to save her relationship with Gabriel (Seth Gilliam).

Did that happy kumbaya seem too good to be true? Well enter Alpha, donning Hilde’s dress and hair. She glides through the fair, eavesdropping on every conversation she can to gain more intel on her foes. She even introduces herself to Ezekiel (“You can call me Debbie”) and whisks him off-screen to a clothing booth. Suddenly all these happy faces are in grave danger.  She’s there for Lydia of course, but her daughter firmly rebukes her and The Whisperers. Lydia orders her mother to leave her new friends alone. “If you tried to hurt me, they would kill you” she she yells, “All I’d have to do is scream.” Alpha is shocked and angered, telling Lydia “You’re not one of us. You never were.”

Michonne, Carol, Daryl (Norman Reedus) and Yumiko (Eleanor Matsuura) set out to help reinforce Hilltop’s defenses. On the way they discover Highwayman Ozzy (Angus Sampson) inspecting Hilde’s overturned cart with his men. Michonne and company follow some tracks into the woods in search of survivors, but Daryl gets skittish when he sees diverging tracks. They are soon surrounded by walkers, but the battle hardened quartet quickly defeats them.

Unfortunately, the group is not able to defeat an army of swarming Whisperers and they are tied up as prisoners. Night has fallen and Alpha emerges wiping blood off her machete. “I ran into some trouble on the road” she mutters, and comic fans cringe, knowing what comes next. She takes Daryl out to a ravine. He looks down upon a zombie horde of thousands. She mentions that she has marked the border that designates her land and his. If anyone crosses the border in the future, she will unleash the horde on their communities. “You’ll see it when you leave” she sneers.

The prisoners are released and they make their way to Alpha’s border as the sun rises. Along the way they encounter Siddiq (Avi Nash) tied to a tree. He can’t speak through his tears and escorts them further. To their horror, the border is marked by a series of ten pikes, each with a severed head atop it. The camera pans to reveal the heads of Ozzy, his lieutenant Alek, former Saviors Frankie and DJ, Tammy Rose, Addy, Rodney, Enid, Tara, and Henry. Daryl tries to shield Carol’s eyes from her son’s reanimated head, but it’s too late. Another child she could not save.

Later that day, everyone reconvenes at the fair, and Siddiq addresses the crowd. He says that he was also kidnapped by Alpha, but was allowed to live in order to tell the story and make everyone afraid. But Siddiq is intent on telling the truth, about the bravery of the deceased. Ozzy and DJ found the captives and burst onto the scene slaughtering Whisperers. It gave everyone the opportunity to fight back. Despite some captives not knowing the other, Siddiq recalls that they all fought together, “as family.”  Their valiant efforts were eventually cut short when Alpha arrived with reinforcements. The communities are reeling from their loss. Lydia places one of Hilde’s Hilltop pendants around Henry’s pike as snow begins to fall.