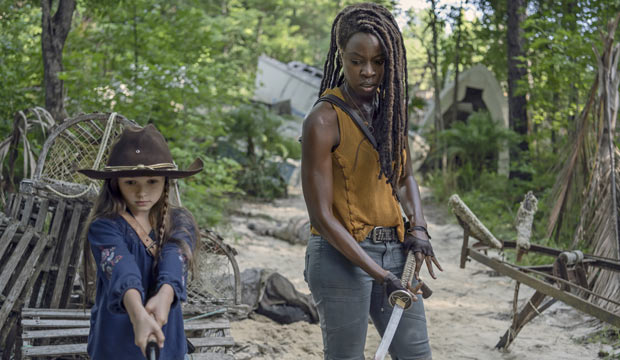 After a shocking betrayal last week, Alexandria’s doctor Siddiq (Avi Nash) met a tragic fate at the hands of a Whisperer spy. This murder propels “The Walking Dead” through its midseason finale, as the central characters are on edge and out for revenge. In this supersized episode, the Whisperer threat looms large, while a new face could signal the departure of an old favorite from the long running series. Here are the top five best moments from “The World Before.”

To Catch a Spy

“I don’t care if you’re new to us” Alpha (Samantha Morton) hisses at Dante (Juan Javier Cardenas) in an opening flashback sequence. She orders her new recruit to win trust and be her “eyes and ears” inside Alexandria. Having joined the skin mask crew after last season’s blizzard, Lydia conveniently has no knowledge of Dante. This allows him to sabotage the water supply, paint “silence the whisperers” messages around town to rile folks up, and strange poor Siddiq undetected.

Dante’s cover comes crashing down after Rosita (Christian Serratos) knocks on Siddiq’s door just after his death. With baby Coco in arms, she gives Dante a skeptical look when he tosses out a bogus story that Siddiq was called out to tend to a sick citizen. Sensing her distrust, he pulls a knife on the new mother as she sets Coco in a bathtub for safety. Dante lunges at her, but Rosita fights back and stabs him just in time to see the reanimated Siddiq lurching towards her baby. In a tragic twist, Rosita is forced to put down her former lover but takes out her rage on Siddiq by beating him into a pulp.

A distraught Rosita confides in boyfriend Gabriel (Seth Gilliam) that she is suddenly afraid of death for the first time in her life, as it would leave Coco an orphan. Gabriel has been reviewing Dante’s interview tape from when the killer first arrived at Alexandria and is kicking himself for not sensing anything amiss with Dante sooner. He ends up minimizing Rosita’s feelings leading to her storming off proclaiming “maybe Dante was right about us. We’re not as strong as we think we are.”

Rosita’s rebuke spurs a shift in Gabe and he confronts Dante in the jail cell. Gabe demands to know if Dante even had a family like the one he described in his interview video. But the Whisperer mole simply replies that the concept of family is meaningless because the world is full of selfish people who don’t deserve second chances. Gabe leans in close and agrees that there are many who don’t deserve a second chance, and yet they get one anyway. Dante looks hopeful for a moment, as if his words connected with the priest. Gabriel isn’t in the mood for second chances however, and proceeds to brutally stab Dante to death.

Michonne (Danai Gurira) learns of Siddiq’s murder while en route to Oceanside. So when a stranger is discovered stealing from the fishing community, she is immediately suspicious of another Whisperer spy. The man tries to flee when walkers descend on the Oceanside camp, but Judith (Cailey Fleming) proves her battle-readiness and captures him for her mom. Though he is tied up and interrogated, he is thankful for being alive, stating “mercy is in short supply these days.” The phrase instantly conjures memories of Rick in Michonne’s mind. Michonne learns that the man is simply trying to get home to his family who lives in a fortified island military base. Michonne and the stranger strike up a deal: she will set sail with him to the island and bring back powerful weapons that can be used to wipe out Alpha’s Whisperers. The stranger finally introduces himself, “I’m Virgil,” and the two take to the sea in a sailboat.

Aaron’s (Ross Marquand) connection with Gamma (Thora Birch) pays off, and she trades the location of Alpha’s horde for the chance to see her baby nephew. Carol (Melissa McBride) is of course in favor of hunting and destroying this massive zombie collection. She sets out with a group including Aaron, Daryl (Norman Reedus), Magna, Jerry, Connie, and Kelly. When Carol crosses Alpha’s border, a careless Carol almost steps on a bear trap. Daryl gives her a stern warning about disregarding her own safety: “You never came off that boat. It’s like talking to a goddamn ghost.” Carol tears up at her friends words, admitting she doesn’t know how to move through or process her rage. “I’m the one you tell,” Daryl says lovingly as the two embrace.

The group beyond the border reaches the supposed location of Alpha’s horde but only find an empty field. As they make their way back, Carol spots Alpha across a clearing. Alpha grins and runs away and Carol gives in to her angry impulses and gives chase. Had Carol stopped to think for a moment, she could have used her bow to fling arrows at Alpha from a safe distance, but her impulsiveness leads her to follow the Whisperer into a cave. The group fends off a few zombies and heads in after her. Daryl is the last to enter the cave, but strangely hears nothing from his companions when he calls out. As he turns a corner, he plummets down a hole in the floor. The whole group has fallen down here, into a subterranean den, where thousands of zombies moan and stretch decaying hands towards the trapped crew. Alpha’s horde is found, but we will have to wait until Season 10 returns to find out who escapes the caves alive.

Burning Dante’s body was a missed opportunity. I was waiting for Gabe to place his head on a pike at the border. With a Whisperer war inevitable, why not give the enemy a taste of their own medicine?

It is still unclear who let Negan (Jeffrey Dean Morgan) out of his cell. Did Carol want to unleash him on The Whisperers? Did Aaron want to thank Negan for saving his life? Either way, Negan’s new alliance with Alpha will be a major force going forward.

Who is Eugene’s (Josh McDermitt) radio buddy? There are extremely few clues as to the mystery woman’s identity, however this could be the introduction of The Commonwealth from the comic series. If the show follows the path of the graphic novels, this technologically advanced community provides the next major story beats.

Is the Virgil’s military base the same location that produced the helicopter which saved Rick? If so, Michonne could discover her former love there. With rumors of Danai Gurira leaving the series in order to appear in spin-off films with Andrew Lincoln, this could be an opportunity to write her out of the main saga.