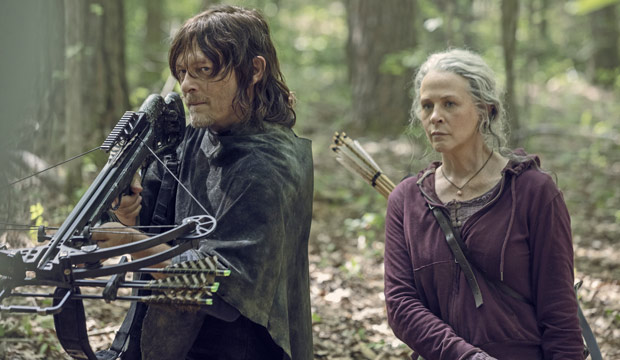 After suffering tremendous loss at the hands of The Whisperers, “The Walking Dead” leaps forward a few months to show how the survivors are coping with their losses. AMC’s hit series has experienced a slew of cast and location changes over the years, and Season 10 looks to once more alter the dynamics of the apocalypse. These are the top five way the Season 10 premiere “Lines We Cross” changes the game a decade into the apocalypse.

The unified communities aren’t taking any chances now. Everyone takes part in battle training on the Oceanside beach (after almost a full season with no appearance, the seaside community returns as a major location). Aaron (Ross Marquand) and Michonne (Danai Gurira) lead as the crew tackles a group of walkers pouring out of a scuttled ship. With the use of shields, blades, and bows, the troupe assumes a medieval style battle formation, and slaughter the undead as a unified machine. That confidence evaporates when Judith (Cailey Flemming) discovers a Whisperer skin mask on the beach and another is found in the woods near mutilated bodies. Aaron and Michonne argue on whether to alert their people to these findings. Aaron favors transparency, but Michonne refuses to alarm her people unless she is sure that the villains have indeed returned.

Back at Alexandria, Negan (Jeffrey Dean Morgan) continues to use his wicked tongue and keen observation to hold sway over his captors. As word leaks about the potential return of The Whisperers, the former Savior leader senses an uneasiness. Her urges Gabriel (Seth Gilliam) to pacify the nervous citizens by omitting unsavory truths and focusing on the positives. After many years of captivity, Negan appears to be angling for an alliance. If Gabe doesn’t come around however, Negan also has his sights set on Lydia (Cassady McClincy). The former Whisperer has trouble adapting to society and is frequently shunned by Alexandrians. When Negan tells her to watch her back, he positions himself as a potential ally.

Carol (Melissa McBride) has received one of Michonne’s comic book story-lines, and has spent the past several months after her son’s murder aboard an Oceanside fishing boat. She is immediately greeted by ex-husband Ezekiel (Khary Payton), but shippers will be sad to see there is no chance of a rekindled romance there. Carol prefers to catch up with her bestie Daryl (Norman Reedus) and appears visibly shaken when he informs her of the Whisperer skin. During their time together in the woods, they hunt a deer, but Daryl holds Carol back from retrieving it because it limps over the Whisperer border. A furious Carol watches zombies devour the animal and scolds Daryl for respecting the borderline: “that deer could have fed 200 people.” Carol is  clearly still reeling from Henry’s murder and the respect for Alpha’s (Samantha Morton) border pours salt on that wound.

SEE Melissa McBride breaks her silence on shocking ‘The Walking Dead’ death: ‘How much more’ can Carol take?

The border comes into play again when a Soviet satellite explodes in the sky and crashes on the other side of the Whisperer’s pike fence. The resulting fire rages through the woods and threatens to spread to Oceanside. Magna (Nadia Hilker) is terrified that crossing the border will start a war, but everyone rushes forward anyway to combat the flames. As day turns to night and water supplies diminish, walkers begin to shamble towards the group, attracted by the commotion. The crew becomes encircled and trapped by flames, but reinforcements arrive from Alexandria and help defeat the dead. Eugene (Josh McDermitt) is adamant that he must retrieve valuable communication tech from the satellite before they leave. Michonne orders him to be quick so as not to be spotted by any Whisperers that could be lurking.

Carol is once more is ready to leave this group behind, whether on another fishing trip or heading out west with Daryl. The pair remain past the border and stand over the ravine that once housed Alpha’s gargantuan walker herd. Daryl surveys the empty space and sees hope and possibility: “I need you to stay” he tells his friend. As Carol ponders her friend’s request, she spots a figure down in ravine. Alpha emerges from the woods and basks in the sunlight before gazing upward. The two women’s eyes meet and exchange glowering looks. Has Carol just sucked her friends into a war? With the potential for vengeance, perhaps Carol will stay after all.

Can FX's 'Breeders' with Martin Freeman save the Emmys' comedy categories?