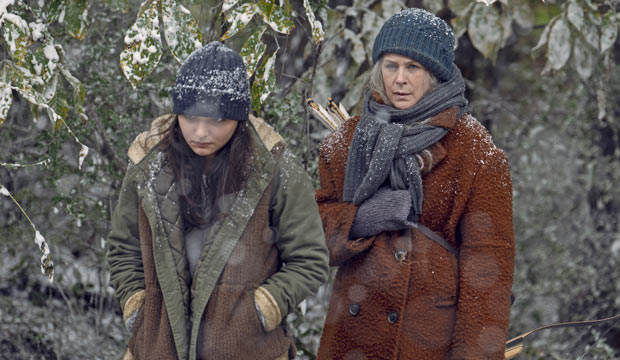 Winter is here. No, you didn’t accidentally click on a “Game of Thrones” piece. “The Walking Dead” beat the HBO epic to the punch by introducing a ferocious blizzard in the Season 9 finale, “The Storm.” Although ten cast members were killed off last week, the suffering isn’t over for the survivors. Ezekiel (Khary Payton) narrates the opening sequence over the radio system and viewers learn that the pipes finally exploded at The Kingdom, with fires destroying much of the infrastructure. The Kingdom has fallen, and its inhabitants must brave brutal conditions as they journey to find sanctuary at The Hilltop. These are the top five moments from “The Storm.”

SEEThanks to Samantha Morton’s Alpha, ‘The Walking Dead’ could finally bite into a major category at Emmys

As the Kingdom refugees trek through the cold, tensions are obviously high when it comes to Lydia (Cassady McClincy). When walkers are spotted in a field, an incensed Alden (Callan McAuliffe) believes them to be Whisperers. “Haven’t they done enough?” he asks Lydia. Carol (Melissa McCarthy) confides in Daryl (Norman Reedus) that all she sees in Lydia is a constant reminder of Henry. Feeling the animosity towards her, Lydia flees into the woods and encounters a zombie frozen in the ice of a pond. She unsheathes her arm, closes her eyes, and begins to offer it up to the creature’s mashing jaws. It’s only when Carol searches for her does Lydia finally pull her arm away. It’s a powerful nod to Carol’s early comic book death, when that depressed version of the character offered herself up to a walker at the prison.

The group is running out of food, heavy snow is coming down, and the nearest way station is miles away since Rick’s bridge is gone. Carol proposes crossing a frozen river to cut down on time, despite it passing through Alpha’s (Samantha Morton) border. So they walk through the pikes, still standing tall as haunting reminders of the dead, and make their way to the river. The ice is solid, but as they start crossing, zombies emerge from the snow on the banks, having been buried in the snowfall.

Lydia uses the walker encounter to flee from the group, but Carol pursues her. She tearfully confesses that she doesn’t want to make the journey. Hilltop won’t make things better “as long as I’m alive” she tells Carol. Lydia takes Carol’s spear and aims it at her own throat, begging for death. “Do it for Henry” she cries, “I’m sorry it has to be you, but I’m too weak.” Carol has lost Sophia. She has lost the prison kids. She had to execute Lizzie. And she lost her adoptive son at the hand’s of Lydia’s mother. She considers the loss of another young person and pulls the spear away as tears stream down her face. “You’re not weak” she tells Lydia, and silently escorts her back to the group.

Along the journey, Ezekiel pulls Daryl aside and asks him to leave the group once they reach Hilltop, so that he can and Carol can heal in peace. Carol later expresses doubt about the ability of their marriage to survive losing Henry. Ezekiel “only blames you because he can’t let himself blame me” she tells Daryl before breaking down. “I feel like I’m losing myself again.” When the Kingdom refugees finally reach Hilltop, Ezekiel happily declares “we made it!” “Did we?” she replies, and says she will head to Alexandria the next morning. Despite the King’s profession of love, she removes her ring and silently dissolves their marriage.

Realizing that Negan (Jeffrey Dean Morgan) will freeze in his cell during the storm, Gabriel (Seth Gilliam) makes the decision to temporarily relocate him. Negan is handcuffed in a house, along with many Alexandrian citizens. However, a clogged flew causes an explosion in the fireplace and forces the group to move to a different house for shelter. They form a line and wade into the raging storm, but Judith (Cailey Fleming) is distracted by Daryl’s dog barking in the distance and runs after it. Without hesitating, Negan sprints into the whiteout after her. His leg is struck by a piece of metal being blown by the storm, but he ultimately finds Judith and brings her to safety. When Michonne (Danai Gurira) eventually returns to Alexandria, she shockingly thanks Negan for saving Judith. The two enemies have a heart-to-heart of sorts, with Negan admiring Michonne’s decision to cross Alpha’s border. It’s possible an unlikely alliance between the two will form in the face of The Whisperers threat.

It’s unclear how much time passes after the storm, but The Whisperers are back in their camp. There’s no snow, only lush greenery. And Beta (Ryan Hurst) tells Alpha that the “time away” was good for the pack. Alpha questions her strength, noting that she will need to make herself even stronger “for what comes next.” Who knows what foul plan she has in mind, but she offers up a switch to Beta who then uses it to repeatedly slash her arm and toughen her up.

The warmer weather also brings hope to Hilltop. Ezekiel is talking to Judith via the radio system, and young Ms. Grimes is hopeful that he can eventually rebuild and return to his home. “Just because we left our house, doesn’t mean we lost our home” the king replies. The two sign off, but the camera lingers on the Hilltop radio to give viewers one last mystery to ponder until Season 10. A voice crackles onto the signal. “Hello? Hello?” the unknown caller asks, before the speech is garbled by a poor connection. “Is anybody out there?”