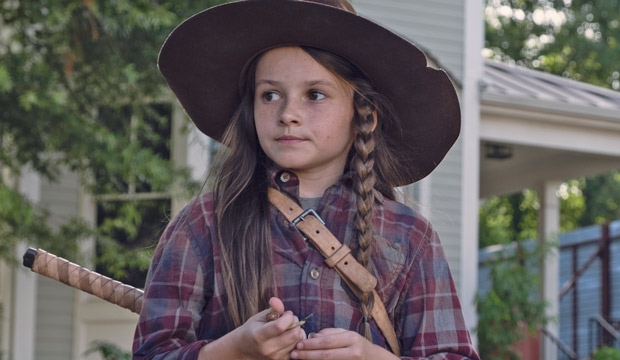 After a massive reveal which left viewers in a state of anticipation, “The Walking Dead” Season 9 shuffles back to life Sunday, February 10 on AMC. The mid-season premiere will pick up where the last episode left off, but you would be forgiven for forgetting some story details during the hiatus. Reanimate your memory with these five important details about the first half of Season 9.

Rick is Gone
Rick Grimes (Andrew Lincoln) was the beating heart of the series since day one. But the courageous leader sacrificed himself in a fiery explosion to save the people he loved. Or did he? Despite being impaled by a piece of rebar and blown off of a bridge, Rick miraculously washed up on shore still breathing. Jadis (Pollyanna McIntosh) found him downstream and whisked him into a helicopter she hailed from a mysterious group. We have no idea where the two are headed, but AMC has promised answers in a series of standalone TV movies centered on Rick. Sadly, his loved ones believe that Rick is dead and gone.

SEE [SPOILER] talks ‘The Walking Dead’ death in shocking mid-season finale: ‘He went out the way he came in’

Shift in Leadership
Maggie Rhee (Lauren Cohan) also filmed her final episode as series regular, though her departure received little advertisement or fanfare. Contract negotiations broke down between Cohan and AMC, with the actress snagging a new series “Whiskey Cavalier.” AMC hopes to keep her on in a recurring capacity, so there is mention that Maggie and her son Hershel Jr. left to live with Georgie (Jayne Atkinson) and her community. Jesus (Thom Payne) took over as leader of Hilltop Colony, though he is generally unhappy with the position. His second in command, Tara (Alanna Masterson) oversees the day to day operation of the settlement and keeps Jesus in check.

Broken Family
After Rick’s disappearance, the series makes a staggering nine year time jump. While there is evidence of plenty of interesting developments, like the marriage of Carol (Melissa McBride) and Ezekiel (Khary Payton), the most dramatic shift is the division between the survivor communities. Alexandria, Hilltop, The Kingdom and Oceanside fought together as an allied militia to take down The Saviors, but without Rick their unity proved to be short lived. Michonne (Danai Gurira) in particular has a frosty relationship with just about everybody. There are vague references to some controversial action Michonne took, but so far it’s unclear just what she did during these missing years to evoke hostility from former friends like Tara and Carol. Where Michonne once saw a peaceful interconnected world, she now enforces strict closed borders.

Newcomers
Ten-year-old Judith (Cailey Fleming) saves and recruits a group of survivors. Michonne is adamant about keeping newcomers out of Alexandria but reluctantly delivers them to Hilltop. Normally, at least one person from such a group would have become walker food by now, but since they are all still standing these survivors could play an important role in coming conflicts. The group is lead by tough-as-nails Magna (Nadia Hilker), and features her bow-wielding girlfriend Yumiko (Eleanor Matsuura), music lover Luke (Dan Fogler), sympathetic Connie (Lauren Ridloff), and Kelly (Angel Theory), who is Connie’s sister and ASL interpreter.

Masked Menace
There is a terrifying new threat in the area. Someone has been watching the Alexandria survivors. Several people note that zombies are behaving erratically. Then Eugene (Josh McDermitt) becomes trapped in a barn, convinced that a herd of zombies is searching for him, whispering in the dark. As a group escorts Eugene to safety, the herd circles back, and seems to have a mind of its own. Our heroes do battle in a spooky cemetery and a walker springs to life, lunging at Jesus and plunging a knife into his chest. Daryl eliminates the attacker and is horrified to learn that it is a human wearing a zombie skin mask. This commences the highly anticipated “Whisperers” storyline from the comics, where living threats roam among the dead.