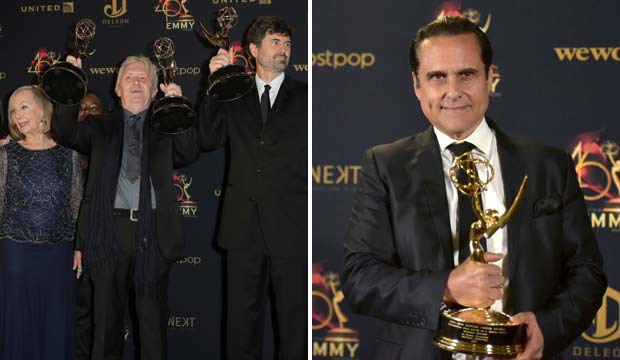 “Days of Our Lives” came into the 2019 Daytime Emmys with the most nominations (27), but it was “The Young and the Restless” that left Sunday night’s ceremony with top honors. The CBS soap opera won Best Drama Series for the 10th time in its history, which makes it the second show ever to hit double digits, following “General Hospital” with its record 13 victories. But “GH” had a good night too thanks to its historic sweep of the acting races. Check out the complete list of Emmy winners here.

The writing was on the wall for “Y&R’s” victory early in the show when it won Best Writing Team and Best Directing Team. Since those awards are decided based on sample episode submissions just like Best Drama Series, it seemed like a good bet that “Y&R” would end up with the top prize too. Ironically, it was completely shut out in acting categories, where it had five nominations. But when you combined the three awards tonight with its five from the Creative Arts Awards, that gives “Y&R” a total of eight victories this year, more than any other soap.

“GH” may have lost the top prize, but it actually took home the most hardware during the telecast thanks to its unprecedented five acting wins out of the seven acting races. The series won Best Actor (Maurice Benard), Best Supporting Actor (Max Gail), Best Supporting Actress (Vernee Watson), Best Younger Actress (Hayley Erin) and Best Guest Performer (Patricia Bethune). It won one other award at Creative Arts, bringing its grand total this year to six.

That left only two acting awards for other soaps, and both were upsets. In the Best Actress race, Jacqueline MacInnes Wood (“The Bold and the Beautiful”) defeated Maura West (“GH”). And in the Best Younger Actor contest, voters opted for Kyler Pettis (“Days of Our Lives”) over his co-star Lucas Adams.

Alex Trebek (“Jeopardy”), who recently revealed he is fighting cancer, received a standing ovation when he was announced as the winner of Best Game Show Host. It was his sixth victory, and his first since 2008. But “Jeopardy” was upset in the race for Best Game Show by “Family Feud,” which was the first victory for the show in that category since all the way back in 1977.

What did you think of the winners?