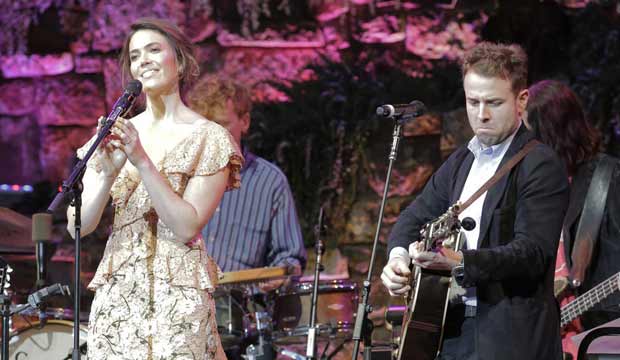 NBC and 20th Century Fox Television pulled no emotional punches during a special Emmy FYC event for “This Is Us” recently held at the John Anson Ford Amphitheatre. A musical performance and subsequent panel featuring actors Milo Ventimiglia, Mandy Moore, Susan Kelechi Watson, Sterling K. Brown, Justin Hartley, Chris Sullivan, and Chrissy Metz was very much in keeping with the heart-on-its-sleeve spirit of the show. One wonders why the prepared meals didn’t come with a handkerchief.

The evening began with a mini concert highlighting the music of the show’s composer Siddhartha Khosla, who fronted a small ensemble of musicians in performing the show’s theme song as well as musical selections from the third season. It was capped by a moving performance of the original song “Invisible Ink,” featuring lead vocals from Mandy Moore, accompanied by Khosla and co-writer Taylor Goldsmith, who also happens to be Moore’s husband. Moore told Gold Derby that it “was bizarre to be talking about character backstory” with her husband as he was working on the tune. But she exclaimed, “I love the song. I love what it represents and I love that we got to share that moment together.”

During the panel that followed, showrunner and creator Dan Fogelman was effusive in his praise of Khosla, who was actually Fogelman’s college roommate. “I recognized that I met the most talented musical person in my life when I was 17-years-old,” Fogelman said. “I hope he gets recognition, and Mandy and Taylor and Sidd’s beautiful song does as well because it’s very special and it’s such a key part of the show that often goes unnoticed.”

The panel also highlighted each actor by screening specific scenes from season three as showcases of their work. Emmy winner Brown was a firebrand during Randall’s a city council debate, while Moore’s clip showed a grief-stricken Rebecca deciding to attend a grief therapy session after her husband’s death. But members of the audience most shaken up by Metz’s clip in which Kate prays for her premature baby in the NICU; she names him Jack after her father before asking her late dad to make her baby okay. Members of the panel were shaken up too as Moore could be seen wiping away tears as the scene played out.

SEEJustice for Justin? ‘This Is Us’ star Justin Hartley could receive Emmy bid after last year’s crushing snub

Fogelman was predictably tight-lipped about the upcoming fourth season, which he described as “really ambitious.” He did admit that the first episode is already written, and he left the audience with only this hint: “I can’t tell [you] much about the storyline, but … people will be talking about it. It’s different and unusual.” Follow the links below for all our chats with the “This is Us” cast and crew on the red carpet.

MAKE YOUR PREDICTION: Who'll win Emmy for Best Drama Series?
To save your prediction, you must log in to Gold Derby. Click here to sign in with existing account -- or create a new one.
PREDICTthe Emmys now; change them until July 16