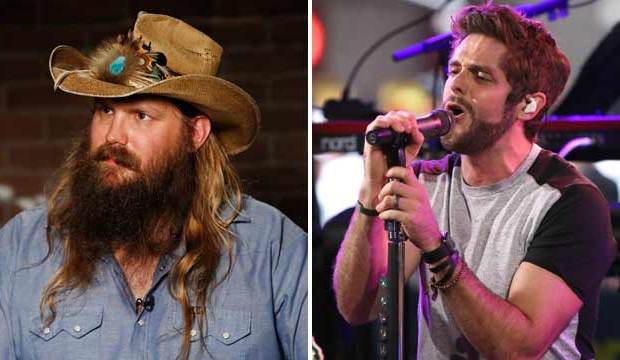 Chris Stapleton comes into the 2019 Academy of Country Music Awards tied with Dan and Shay for the most nominations (six apiece), and for Stapleton that includes a bid in the top category, Entertainer of the Year. So it seems like he should be a rock-solid front-runner for Male Artist of the Year, an award he won twice before (2016, 2018). But could he be vulnerable to an upset from Thomas Rhett? It wouldn’t be the first time.

But Stapleton reclaimed Male Artist of the Year in 2018, and according to the combined predictions of Gold Derby users, he’s likely to win for the third time this year; he gets leading odds of 16/5. However, Rhett ranks second with 39/10 odds, and he’s backed by 3 of our Top 24 Users who got the highest scores predicting last year’s ACM winners, as well as 3 of our All-Star Top 24 who got the highest scores when you combine the last two years’ predictions.

But this might be more of an uphill battle for Rhett than 2017 turned out to be. For starters, Stapleton was in-between albums that year, and he had only two other nominations, so the door was open for Rhett to ride the wave of his crossover hit single. And Stapleton wasn’t nominated for Entertainer of the Year, so he wasn’t quite the dominant presence he is now. But in the 2019 race Stapleton is up for Entertainer of the Year and Album of the Year as artist and producer for “From A Room: Volume 2.” And this time Rhett is the one in-between albums; he has no other nominations. Can Rhett really overcome that deficit?